The first city-organized mayoral debate of the 2022 election season took place on Oct. 17 at the UCI Student Center, opening the local campaign season for the first time since the pandemic.

The candidates for this year are current mayor Farrah Khan, Tom Chomyn, Branda Lin, Simon Moon and Katherine Daigle. Daigle was not present at the debate, but has participated in other online candidate forums though Daigle did not respond to The Howler’s requests for comment.

“We want to give an insightful forum for UCI students and community members, giving the audience an opportunity to understand the candidates’ platforms,” UCI Local Relations Coordinator Christina Kollias said.

Candidates were allowed one minute to respond to each question, and 30 seconds of rebuttal after all candidates had responded. During this time, a candidate could address multiple points that different candidates made. Two sets of questions addressed the concerns of UCI students and audience members.

With concerns arising on municipal action in Irvine, resident attendees questioned the management of the Orange County Power Authority, the regulation of emissions of the All American Asphalt Plant along with over-development and lack of retail in the Great Park.

Candidates shared their thoughts regarding student housing, citizen safety, the protection of taxpayer dollars and more. Chomyn proposed the integration of colleges and Irvine residents to provide more housing options to students and Moon suggested prioritizing safety everywhere in Irvine by increasing funding for the Irvine Police Department.

“Spread the word about the candidates you believe in, because at the end of the day, where we can affect the most change is here at home.””

Taxpayer trust, which was addressed in terms of the confusion with the Great Park, was met with encouragement from Chomyn to return to the city’s masterplan and increase citizen involvement. Lin supported doing away with city council “closed sessions” and reforming the Great Park Board. Khan was in support of the current framework plan and informed the audience of current Great Park plans for parks, lakes and meadows.

Transparency was encouraged by all of the candidates, with multiple stating that they hoped more resident involvement and resident communication would occur over the next mayoral term. Lin in particular suggested banning cell phones on the dais and televising commission meetings to keep residents informed.

General elections will take place on Nov. 8, where community members can vote in person or drop off mail-in ballots at any of the voting centers throughout Irvine.

“Please get out and vote,” Lin said. “Spread the word about the candidates you believe in, because at the end of the day, where we can affect the most change is here at home.”

Khan, the current mayor of Irvine, hopes to continue current programs to advance progress towards carbon-neutrality, diversity, tackling food insecurity and more. Khan also strives to advance transportation availability in Irvine, improving the microtransit program and reducing traffic congestion.
“We will continue to make sure that Irvine is the best place to live, work and play,” Khan said.

Moon, a current military officer, chaplain and pastor, is running for mayor with focus on fiscal responsibility and prioritizing budget spending for the OCPA. He also seeks to ensure that taxpayer dollars are benefitting the community and are protecting Irvine’s veteran population.
“Our first duty is to serve and protect Irvine residents,” Moon said.

Chomyn, a technology account executive and Irvine resident for 25 years, prioritized the Veterans’ cemetery and memorial park in the Great Park. Chomyn also advocates for district elections, the disbandment of the OCPA and relocating the asphalt plant.
“There’s no transparency in reporting from the city about OCPA,” Chomyn said. “We put in $7 million of our taxpayers’ money to get this started, and we want to see the books.” 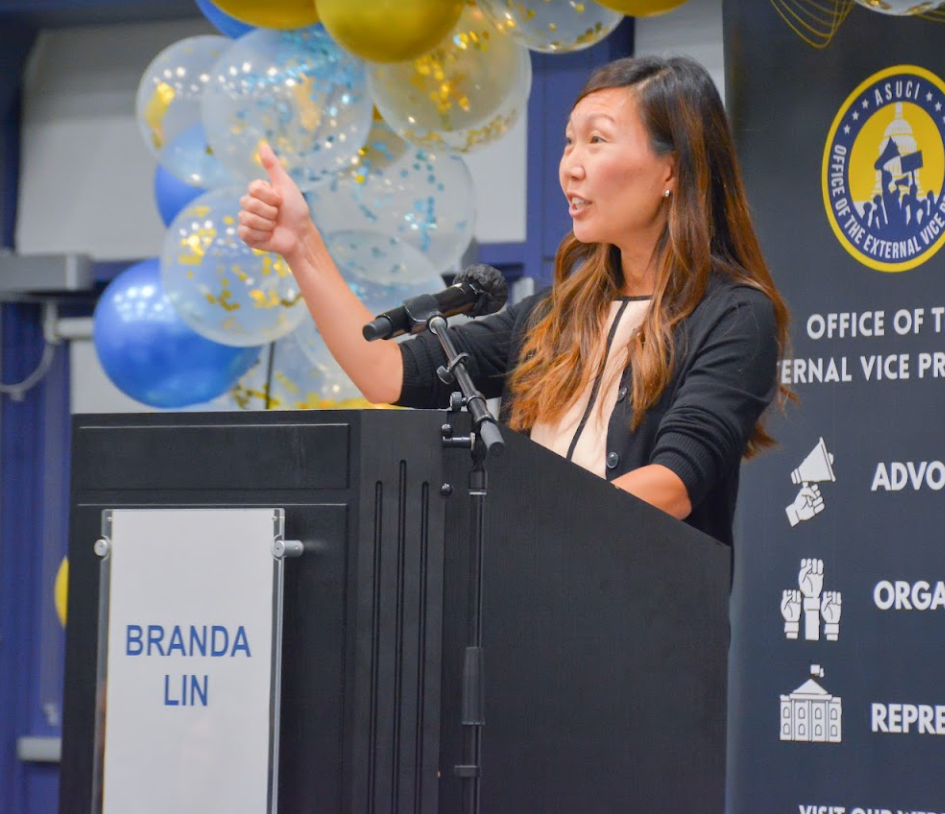 Lin is a paralegal, founder of the Irvine Watchdog and is a former Community Services Commissioner. Lin focuses on transparency in government, management of the OCPA and relocation of the asphalt plant.
“There’s so much good we can do on the local municipal level,” Lin said. “Transparency matters, and I want to ensure that residents know what’s happening within the community.”