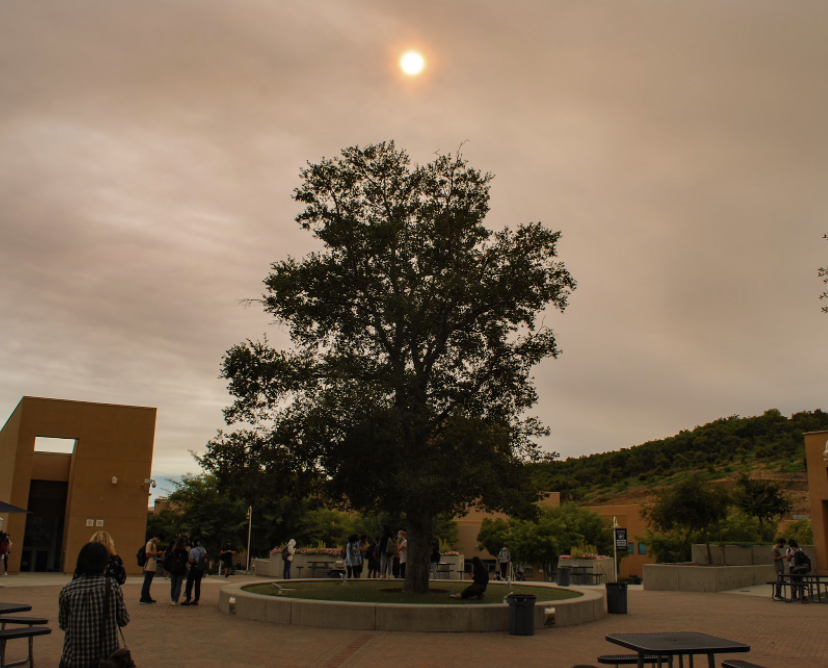 FIERY SKIES: Northwood students are greeted by thick smoke from the Dixie Fire in Northern California as they step outside.

When Northwood students stepped out of class on Sept. 25, the sky was hazy and tinted the surroundings orange—a result of smoke drifting down from the Dixie Fire in Northern California. Reminiscent of the Silverado Fire that burned over 13,000 acres in Orange County just last October, the unfortunate reality is that wildfires are becoming more frequent due to a combination of climate change and an absence of preventative strategies and specific fire management policies. Clearly, new strategies, better allocation of resources and stronger legislation like California Senate Bill 332 must be employed to support wildfire control.

2021 is currently on track to become one of the most detrimental wildfire seasons yet, with a record of approximately 2 million acres burnt as of Oct. 11. One of the main contributing factors towards the trend of increasingly severe wildfire seasons is a lack of preventative measures compounded by weather patterns brought about by climate change.

Despite the increased risk for wildfires created by climate change as well as the ongoing drought, California largely focuses its efforts on fire suppression rather than alternative preventative measures. One key strategy the state as well as private landowners could adopt would be prescribed burns—controlled burning of land highly susceptible to wildfires—as a preventative measure to clear areas full of dry, flammable materials. Though they pose potential for air pollution, controlled burns have been practiced in Florida as a form of forest management, and under the Florida Forest Service’s smoke management plan, have been successful in clearing hazardous materials while still protecting air quality. They have also been recently used in California to protect Sequoia National Forest from the KNP Complex Fire through performing prescribed burns around the bases of sequoia trees.

“Small, well-managed burns are an essential aspect of land management in many fire-prone areas, removing tall brush and dead foliage that can cause bigger fires to burn out of control under the worst weather conditions,” a TIME magazine article published on Aug. 21 states.

With the allocation of $1.5 billion towards wildfire prevention this past September, California has adequate resources to support facilities necessary for controlled burns, and can make good on its promise made over a year ago to clear 1 million acres of forest land a year. The other main barrier that still exists lies in the California legislature, which has strict guidelines for accountability if burns go wrong. Senate Bill 332 was passed in the California Senate and approved by Governor Newsom on Oct. 6, lowering the penalty to holding individuals responsible only in cases where they are clearly negligent. This incentivizes more private landowners to adopt controlled burns, as it lowers the risk of legal ramifications in the case that burns do not go as expected.

Another problem with current fire management is the “let it burn” policy, which allows for monitoring of certain fires deemed low risk instead of immediately putting them out. This policy drew statewide attention this summer as a small forest fire originally deemed no threat to the public by the U.S. Forest Service grew into the Tamarack Fire, burning over 60,000 acres and damaging multiple man-made structures. The suspension of the controversial policy by the Forest Service in August marked a step in the right direction, and its original purpose can be easily replaced by controlled burns when managed correctly.

This being said, it will take considerable time and effort, not to mention long-term reliable federal funding, to steer California towards a shorter and safer fire season. Continued federal funding for fire management would allow for adequate budgeting to cover expenses for prescribed burns and extra fire troops, both of which are necessary for the continued suspension of the “let it burn” policy. Stronger climate resolutions on part of the federal government could also tackle the root cause of lengthening wildfire seasons: climate change.

With so many communities built near high-risk fire zones, California and the federal government would do well to adopt new strategies to halt the alarming trend in fire season length, or else soon face the devastating consequences of uncontrolled fire growth.