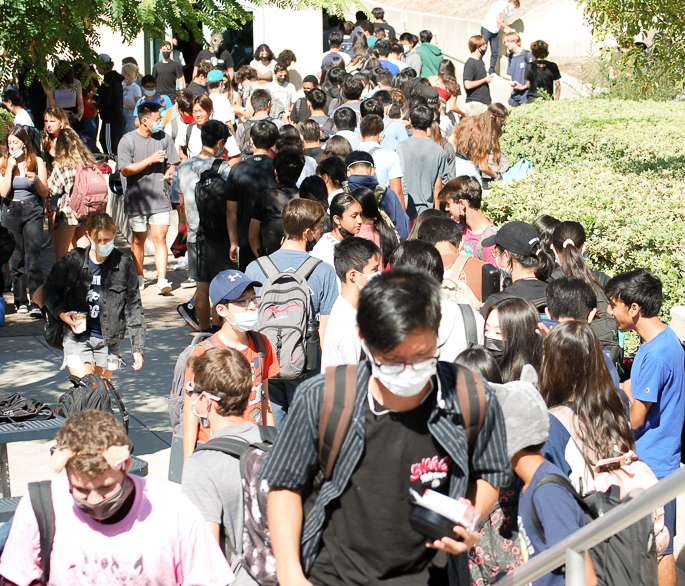 CHAOS AT LUNCH: Long and crowded lines, limited food choices and increased food waste are just some of the numerous problems with the distribution of free lunches at Northwood.

The hidden costs of free lunch

The introduction of free meals through the California Universal School Meals Program has been accepted as a great idea to combat a multitude of issues, but there’s no such thing as a “free” lunch. With the lunch lines lasting far into our lunch periods, food supplies being drained almost immediately and health concerns on the rise, it’s fair to stop and consider: Is there a better alternative?
Free lunches do come with numerous benefits. The No Kid Hungry foundation found that around 1 in 6 kids in California live in food insecure houses, or households that don’t have enough food to guarantee good health. The introduction of lunch at zero cost allows all students to have access to a decent meal without having to go through any additional processes other than being registered.
Although the idea itself of free meals for students is beneficial in theory, the execution of this policy has led to some considerable pitfalls.
While it is true that more students have access to lunch under the Universal School Meals Program, the sheer chaos of the lunch lines has deterred many students from even attempting to get food. The lines at the Northwood cafeteria reach The Oak within the first couple minutes of lunch, and by the time half of students get to the cafeteria, they are met with two significant problems.
First, the majority of the food is gone. While you can’t be picky with free food, it can be unfair to students with dietary restrictions: A vegetarian may feel disheartened when the only meals left consist of meat. Second, there is barely any time for students to eat, as those at the end of the line have around 20 minutes at best to shovel down their food. This exacerbates health issues, as eating too quickly is often linked to weight gain and insulin resistance, among others.
Beyond the health issues, free meals have also led to an increase in food waste. Students are expected to take three different items per meal: one entree, one fruit or vegetable and one drink. While it is the cafeteria’s responsibility to give students food, the same cannot be said for getting them to finish all components of their meal. As a result, many students trash the parts of their meal that they don’t want to eat, which greatly contributes to the excessive amount of food waste. Researcher Christine Costello of Penn State’s College of Agricultural Sciences found in 2019 that American schools can waste up to 53% of the food they serve. This was already an issue when students had to pay for lunches, but now it has drastically increased, especially since students don’t feel as bad about throwing away something they got for free.
This isn’t to say that we should remove the free lunch program—all students deserve to have access to food without worrying about their financial status. Rather, the main issue at hand is the poor implementation of the idea within our school, and many changes can be made to solve our problems.
One option is implementing a staggered school schedule. Similar to last year’s staggered upstairs and downstairs breaks (for the hybrid model students), splitting students into two lunch periods would lead to decreased traffic within the school lunch lines. This would solve multiple problems, such as giving students more time to eat and allowing for the cafeteria to restock food between the two lunches.
Another option would be to increase the length of lunch. This would not only have the same benefits as above, but would also allow more students to go home to eat lunch. We can turn to the models of other nations when it comes to lunch breaks, such as the French Ministry of National Education, which offers their students a 2-hour lunch break, enough time to go home and enjoy a full meal with their families. Longer lunches could be adapted quite easily into our bell schedule, especially considering the fact that the rest of our schedules are quite similar.
Overall, the concept of free lunches should not be dismissed. It has the potential to help with the issues that plague the American public school system, such as childhood obesity, malnutrition and poverty. However, attempting to weave it into the system without sufficient planning beforehand leads to the chaos we can see every day at 12:10 p.m.