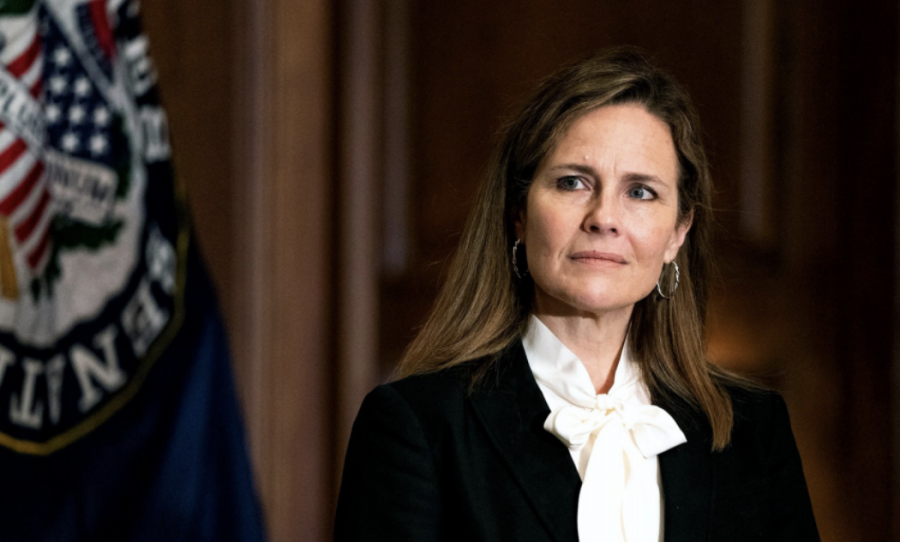 GOING FOR THE GAVEL: Following the demise of Judge Ruth Bader Ginsburg, Coney Barett was nominated as the new Supreme Court judge by President Donald Trump.

Destroying the road to equity

“My most fervent wish is that I will not be replaced until a new president is installed.” This was the sentence Justice Ginsburg prompted her granddaughter to write before her untimely demise. Trump, however, has nominated a candidate whose beliefs place every decision Ginsburg has made in hopes of a better future in peril: Amy Coney Barrett.

Barrett, who thinks being gay is a “sexual preference” rather than an immutable part of identity that is not chosen, and who repeatedly dodged questions on same-sex marriage during her U.S. confirmation hearing. Coney Barrett, who does not believe in a woman’s right to choose, and who has indirectly threatened to overturn Roe v. Wade decision legalizing abortion. Rape victims, young girls, underprivileged women without the financial means to raise a child. These are the people who this decision will hurt the most, and guess what? Barrett’s Catholic beliefs that “affirm the teachings of the Church as truth,” regardless of proven science and statistics, do not solve their problems.

Barrett, who thinks guns should continue to be legal, regardless of their catastrophic impact on the lives of young teens and the victims of racial violence. She dissented in Kanter vs. Barr, in which the appeals court upheld a decision restricting the Second Amendment rights of a felon convicted of mail fraud, claiming that this violated his Constitutional rights. According to this reasoning, it follows that any person convicted of a major felony due to suspicious behavior can remain armed, regardless of an imminent risk of more dangerous future occurrences.

Barrett, who has made questionable decisions when it comes to immigration policy, including defending the Trump administration’s rule denying immigrants permanent residence if they are deemed “likely” to use public assistance. Additionally, she has refused to review cases by immigrants applying for humanitarian protections, which are essential for immigrants to obtain deportation relief and other benefits for quality of life.

Barrett, who helped to block the U.S. Equal Employment Opportunity Commission from stopping an employer who was appointing their employees based on ethnicity. Columbus Dispatch reports this is a decision which, in the words of three dissenting judges, “deprived people …of employment opportunities at their preferred geographic location.”

During trying times, there are some issues which test the intelligence of leaders, some which test their strength, and others which test their basic human instincts. Following the passing of Justice Ruth Bader Ginsburg, President Donald Trump’s instincts are in question, because the differences between Barrett and her predecessor are stark. Ginsburg was a strong woman who spent her life battling adversity, unifying the liberal block, and shattering the glass ceiling for future generations of women in politics. Meanwhile, Barrett has ideals that would solidify conservative dominance on the Supreme Court and restrict the passage of liberal decisions. Some might argue that my judgement is being clouded by political opinions, but there is nothing wrong with conservative or originalist views. It is when they are combined with a lack of empathy for oppressed and minority groups that they lead to catastrophic impacts. A balance of liberal and conservative judges leaves room for conversation, while imbalance furthers the dogmatism and polarization that already plague our country.

All in all, this is not a political issue, but a people issue. Barrett’s nomination threatens the lives of millions whose freedom Justice Ginsburg worked so hard to preserve and protect. If she were here today, perhaps she would say it louder for the people in the back: “My most fervent wish is that I will not be replaced until a new president is installed.”

Upholding the integrity of the Constitution

Judge Amy Coney Barrett was met with a wave of criticism following her nomination. Her strong Catholic faith and views opposite Justice Ruth Bader Ginsburg caught fire on social media. However, there is much irony in criticizing Barrett purely for most of her viewpoints, as her consistent track record means that Barrett meets the qualifications to be a credible Supreme Court member.

Barrett approaches judging through a rigid adherence to the Constitution. In due part to her clerkship under former Justice Antonin Scalia, her rulings rarely stray from what is prescribed in the Constitution, evident in her short career in the Court of Appeals for the Seventh Circuit. Her dissenting opinion on Kanter v. Barr, for instance, consisted of a 37-page paper detailing the intentions of the Founding Fathers in the ownership of a gun. Though it is possible that this unwillingness to shift with the times is a fallacy in Barrett’s judging, stricter judges are necessary to put a threshold on how far government powers can expand.

This is especially true in an age where progressivism, or social reform, has emerged at the centerpoint of politics. Questioning the extent of our civil liberties are vital towards a healthy democracy, but deciding where the boundaries lay for Congress’ policies remains ambiguous due to how the majority inevitably fluctuates over time. It is impossible to assert that Barrett’s addition will suppress progress entirely or that her future actions would substantially impact social reform.

Conservatives will hold a 6-3 majority over the Supreme Court if Barrett is confirmed by the Senate, giving opportunities to overturn landmark cases. Roe v. Wade is the primary case of concern, as its precedent on the federal legality of abortion could be flipped with Barrett’s personal opposition to abortion. Barrett also states Roe v. Wade is not “super-precedent” as per her confirmation hearings, meaning that the case is debated enough to question if its original decision should stand. The pro-choice, pro-life debate remains a deeply contentious point, but supporters of the pro-life movement will find Barrett’s nomination appealing.

A judicial confirmation on the horizon encourages Republican voters in swing states to participate in the upcoming election. The possibilities she presents in overturning cases in favor of a conservative-leaning population may likely spur voters to cast their ballots. These votes look to be particularly important considering President Donald Trump’s 16-point deficit to Joe Biden as per CNN’s poll conducted from Oct. 1-4. The Senate’s final confirmation vote is expected to be around Oct. 26, days before Election Day; her nomination could end up altering the election outcome.

People are often threatened by the prospect of ideas that do not align with their own. Barrett’s stance on several hot topics may perturb those with opposing views, but her consistency and assertiveness will ensure that she retains the integrity of the Constitution while serving on the Supreme Court.