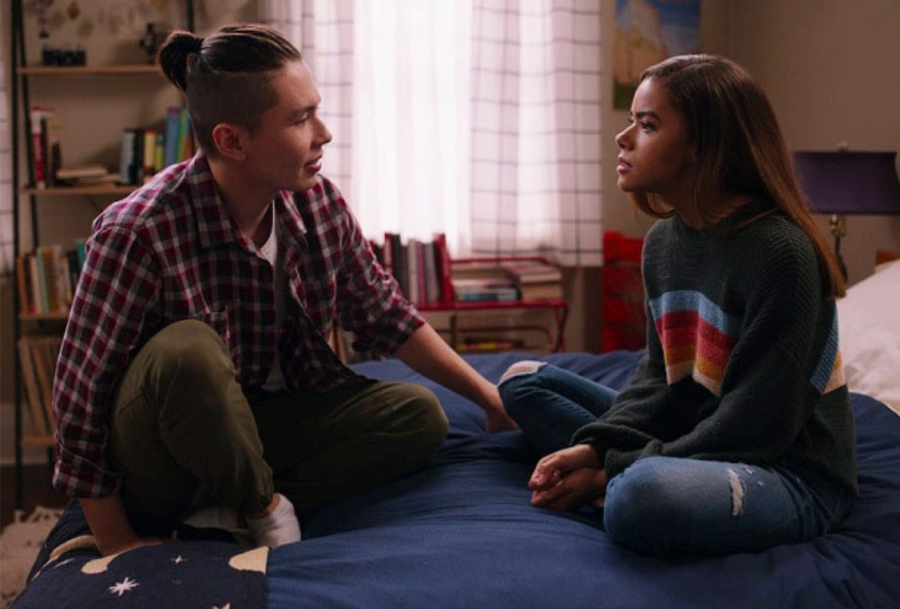 QUESTIONABLE WRITING: The show included a controversial “Oppression Olympics” scene, in which Ginny and Hunter compare each other’s histories of oppression as minorities.

“A rolling stone gathers no moss.” After sitting through all eight excruciating episodes of “Ginny and Georgia,” I’ve found a newfound respect for this statement. It’s obvious that the Netflix show’s creators tried very hard to entertain us—and that’s precisely what makes it so embarrassing.

The title character, Ginny (Antonia Gentry), is a teenage girl who navigates a tumultuous relationship with her young mother Georgia (Brianne Howley) while balancing her role among peers when she moves into a new town. The show, intended as a comedy-drama, manages to snowball into a cringey teen rom-com that combines various aspects of 21st-century culture in a poor attempt to appear relevant. This isn’t necessarily a bad strategy, as teenagers are the show’s target audience, but it severely underestimates the sophistication of our tastes. An attractive, charming male lead and a bit of high school drama isn’t enough to hook today’s youth, and neither are cringey tap numbers. We’re mature enough to recognize inconsistent scriptwriting and outspoken enough to call out irresponsible dialogues.

Viewers will immediately recognize that Ginny is well-educated and passionate about eradicating inequalities in the classroom and beyond; she calls out her racist teacher for his ingrained biases and defends feminism at every turn. While there’s nothing wrong with the ideals Ginny champions, there is a problem with the performative wokeness that is evident in the manner these ideals are presented. Every episode is like a grueling lecture on progressivism, almost like the show’s creators are checking off boxes. A dollop of anti-racism? Check. A sprinkle of girl power? Check. From eating disorders, to mental health, to school pressure, nothing is left out of what adults believe to be the adolescent realm of experience. Considering the number of issues the show advocates for, you’d think they’d take the time to check their own biases.

That brings me to Episode 8. Arguably one of the most difficult 10 minutes of my life was watching Ginny and her boyfriend Hunter— both of whom are mixed-race—accuse each other of being “too white” while they compare each other’s histories of oppression. The series pits minorities against each other in a way that is unrealistic and causes more harm than good. Viewers quickly took to Twitter to condemn what the show pegs as “Oppression Olympics.” One user wrote, “I have never had a conversation like this with any of my… multiracial friends,” and another joked, “Just two people talking how people talk.”

But the problem doesn’t end there. In a heated argument with her mother, Ginny says, “What do you care? You go through men faster than Taylor Swift.” For a character who is portrayed as a righteous protector of social justice, this is quite a regressive statement. The pop star took to Twitter to condemn the “lazy, deeply sexist joke,” and the hashtag “Respect Taylor Swift” trended on the platform. In response, Gentry claimed that her character Ginny is young and imperfect. If Ginny is, in fact, imperfect, then I wonder why the show’s writers have not worked to clearly convey her lapse of judgment in the script by calling her out on her sexist statement, as they have done with other characters. Imperfection is inherent to humanity, and it is the duty of cinema to portray it realistically. But it shouldn’t be used as an excuse for lack of oversight.

I wasn’t just disappointed with “Ginny and Georgia”’s inconsistencies, but I was more incensed by the way they reduce the teenage experience to a couple of buzzwords without actually delving into them. Why wasn’t the discussion about eating disorders and mental health carried the whole way through? Why is it that only one teenager in a class of 25 students is outspoken about anti-racism, and what sorts of conflicts does this cause? How can we learn about the nuances of being a modern-day teenager without the show shoving it in our faces? Many questions are left unanswered, but for now, I’ll just stick to a better version of the show: “Gilmore Girls.”