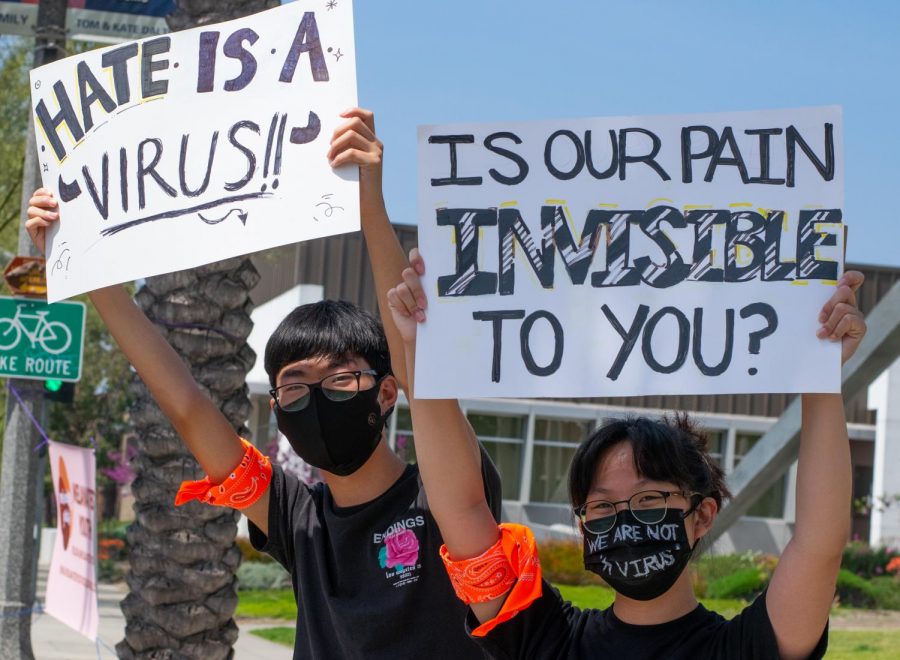 WE ARE NOT A VIRUS: America’s youth speaks up during a Stop Asian Hate protest organized by Melanated Youth.

Asian hate crimes must be eliminated

Anti-Asian hate crimes have recently spiked across our country, taking the lives of many including Daoyou Feng, Hyun Jung Grant, Suncha Kim, Chung Park, Xiaojie Tan and Yong Ae Yue, who were killed in the horrifying Atlanta Spa shooting just last month. Although the attack came as a shock to Americans, events like this are not new; since the start of the pandemic, hate crimes against Asian Americans have increased by 150% in major cities, according to a study by California State University, San Bernardino, and continue to rise. Anti-Asian hate in America has existed since the late 1800s, and action must be taken to eliminate it.

Anti-Asian racist language pandered by politicians to score political gains played a key role in the rise in anti-Asian violence. Former President Donald Trump referred to the coronavirus as “Kung-Flu,” intending to shift blame for his incompetence in responding to the pandemic to Asians. Rather than behave inclusively toward all his constituents, Trump and his administration deepened the racial divide in America. He gave racists a voice and empowered them to commit unlawful actions against Chinese Americans specifically.

Trump’s sentiments were repeated by a Korean congressional candidate from Texas, Sery Kim, as recently as last month, when she said she didn’t want Chinese immigrants to come to America because “they steal our intellectual property, they give us coronavirus [and] they don’t hold themselves accountable.” Kim has since lost many political endorsements.

But this harmful rhetoric remains rampant, particularly at the hands of several irresponsible media outlets, such as Fox News, which has released a shocking amount of content loaded with racist, stereotypical language toward Asians. A prime example of this can be seen in Fox News’s segment “Watters’ World” during the 2016 election, in which conservative political commentator Jesse Watters incorrectly referred to the Korean martial art Taekwondo as the Japanese martial art Karate while in a Taekwondo dojo, showing a blatant lack of respect for Asian traditions and their origins. In another segment, he further ostracized the Asian community by playing movie clips with lines such as “Speak, speak. Why don’t you speak?” whenever Asian elders who did not understand English were unable to answer his questions. Painting the elders as stupid and illiterate, this segment suggested it is somehow funny or entertaining to mock the cultural barriers that ethnic minorities may face in the United States, portraying people who are not stereotypically “American” as intellectually and socially inferior.

The repetitious racist language leveled against Asians by politicians and the media has normalized prejudice against Asian Americans, and certain individuals have taken it upon themselves to act on this hate. The Atlanta murders last month were carried out by Robert Aaron Long, a white man, with a history of sexual addiction that involved fetishizing Asian women, bringing to light clear racial prejudice that fueled the crime, despite police ruling out racial motivation as a factor. It shouldn’t be a question that murdering Asian women in order to resist sexual temptation is indicative of a deeply problematic racial view.

The examples I have highlighted so far come from the last four years, but systemic and even outright racism has been something Asians have contended with for years in America. From the Chinese Exclusion Act of 1882 and the Japanese concentration camps of World War II to the myth of the model minority and the tragic increase in hate crimes against Asians in the last year, it is clear that government and law enforcement still have major steps to take to combat modern racism.

45.7% of the city of Irvine identifies as Asian according to the latest census. We are not immune from Anti-Asian hate, and this was shown last month when city officials held a “Stop Asian Hate” rally to show their support for the Asian community and reject racial discrimination. But the issue is far from resolved. We must continue to speak up against Asian hate, for anti-Asian violence is not an issue just for Asians, but rather an issue for our whole community.

A few ways to support the Asian community during these difficult times is by signing petitions such as the ones available at change.org, educating yourself about the injustices against people of color and calling out racism when you see it. Our nation may have been built on racist foundations, but it doesn’t mean we can’t fix that; it is up to our generation to heal society from its damaged views on race.