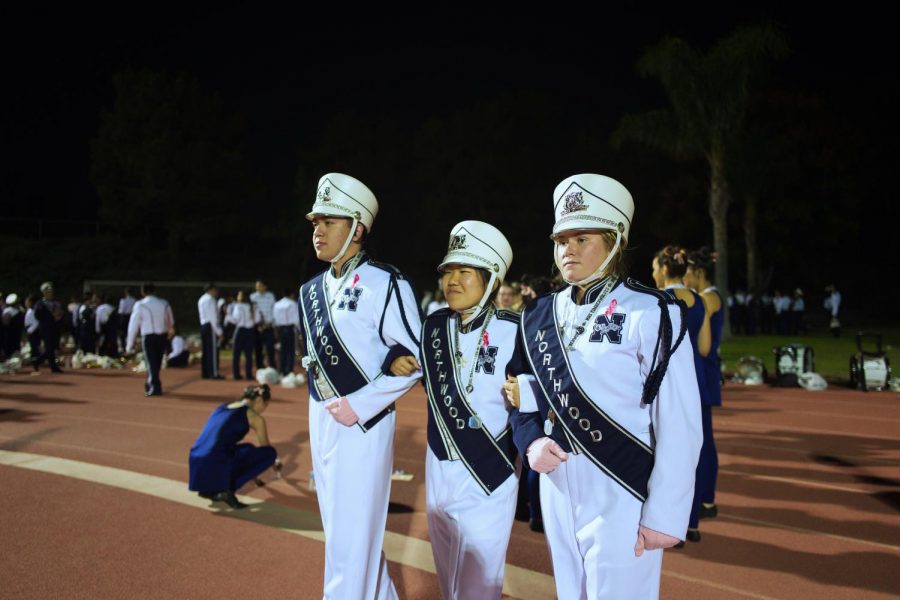 When you see students accidentally wearing Home Depot aprons to second period and the drained faces of percussionists in the morning, it can only mean one thing: it’s marching band season. Let’s take a look at the three drum majors that make all of this possible.

The half-time show kicks off with trumpets blasting the melody of “Bicycle Race” by Queen, which is conducted by senior Hannah Miller, last year’s trumpet section leader.

Miller has played the trumpet since fifth grade and joined marching band after participating in the annual Band Spectacular. She enjoys both the responsibilities and the ability to be herself.

“I think it’s cool that people get to see my weird side even though I’m supposed to be serious all the time,”

Miller said. “Even during stretching or other times I know I mess up and I’m not perfect, but I think that’s okay because not everyone has to be cookie-cutter robots that are always conducting, right?”

In stark contrast to the upbeat “Bicycle Race,” the much slower “We are the Champions” sets the scene perfectly for the swing tune “Crazy Little Thing Called Love,” both conducted by senior Luis Sepulveda.

Sepulveda started on the trombone which he had no previous experience with. He recalls wanting to continue music after middle school and deciding to join marching band after hearing stories about how fun it is.

“I think being drum major is a fun way to incorporate yourself into the band apart from playing, and from my experience, it lets you be a part of the band so much more by helping more people through your role,” Sepulveda said.

From the mellow introduction by the flutes to the crazy time changes in the operatic section, there’s no better way to end the show other than the huge wall of sound at the finale of “Bohemian Rhapsody” conducted by senior Yukako Fujimori.

Previously, Fujimori played the trombone which she has been playing for five years. Now, her favorite parts are being able to impact how rehearsal runs each day and influence the students in unique ways.

“I’m very happy about this year’s theme of Queen because it was also the marching band theme for my brother’s freshman year at Northwood in 2011,” Fujimori said. “I remember it being the greatest thing I’ve ever heard at that time, and I’m happy that I get to end marching band the way he started it, like a full circle.”