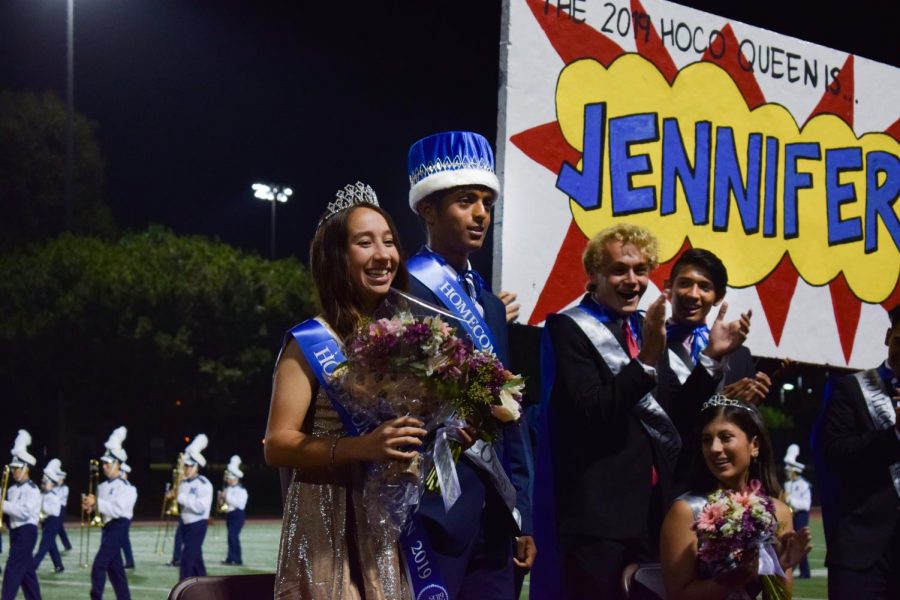 BATTLE OF THE UNIVERSES: From the rallies to the dances to the football game, Northwood students attending the Homecoming activities had a stellar time.

Northwood students duked it out during Homecoming Week’s Battle of the Universes, bringing their superheroes, mysteries, magic and galactic forces to the rallies, football games and the Homecoming dance from Oct. 7-11.

ASB and class councils worked hard to plan the week, decorating the school with cutouts ranging from Superman to Scooby-Doo.

“It was a lot of fun painting all these cutouts,” senior Alex Ibasitas said. “My favorite is definitely the one with the Teenage Mutant Ninja Turtles.”

A major highlight of the activities were the two Homecoming rallies hosted by ASB Pep Rally commissioners seniors Aaron Firth and Michael Huang. Firth and Huang’s demonstration of proper and not so proper dancing etiquette drew laughs from their audience as they executed some questionable moves in front of Madison the Mannequin.

The Homecoming King was revealed as senior Pratyush Das, from the Homecoming Court of seniors Austin Kenyon, Shounok Ghosh, Marvin Israel and Adam Fujiwara, during the rally.

The festivities led up to a huge win for Northwood football against University High School. Northwood’s football team put on a show in their domination of the Trojans, winning 39-14. Senior Jackson Baker played good defense with two interceptions and freshmen Adam Harper turned heads with a 42-yard running play into a touchdown. Senior Quarterback Jaden Piazza led the charge in the first quarter, with two touchdowns and a 68-yard run.

At the halftime show, senior Jennifer Frey was crowned as this year’s Homecoming Queen, among a court consisting of seniors Serena Green, Angelina Chen, Yukako Fujimori and Leah Kong.

Assistant Principal Eric Keith was forced to turn on the lights for the remaining hour of the dance due to some rowdy behavior. However, this didn’t stop students as many of whom continued to dance even with the lights on.

“Just because the lights are off doesn’t mean I can’t have fun,” senior Trevor Ju said.

Northwood, if you missed out on Homecoming, make sure to show school pride and attend Winter Formal on Jan. 17.