Diving in with Chris and Derek 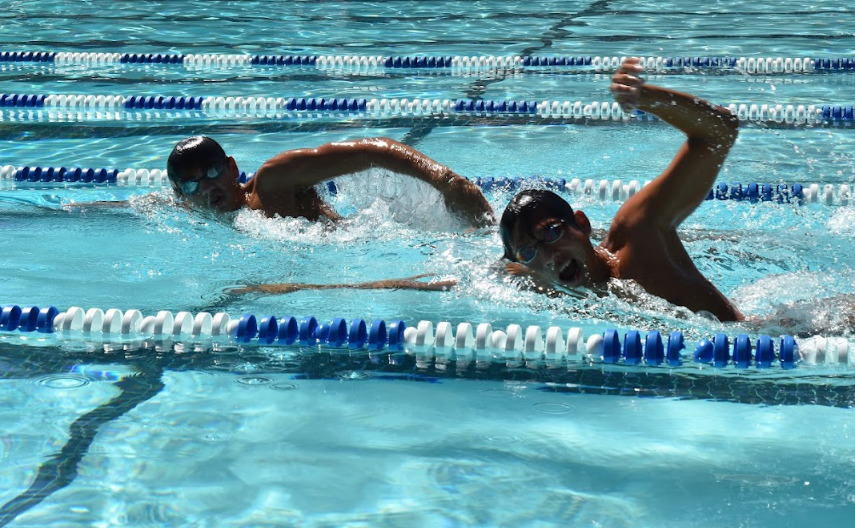 ALL OUT SPRINT: Sophomore Derek Hitchens (left) and senior Christopher Leung (right) race to the finish at Meadowood Pool.

Overlooking Northwood’s pool, two faded record boards bake under the sun. The five year old record will soon be officially retired and the fresh names Derek Hitchens and Christopher Leung will take their place. During the 2022 swim season, Hitchens broke the school record for the Boys 100 Back and Northwestern University-commit Leung broke the school record for both the Boys 200 IM and 50 Free. Both athletes rank in the top 20 Californian swimmers for their respective classes and look forward to another record-breaking season this spring.

The Howler: Last season was huge for Northwood as record after record fell. What are your expectations for the coming season?

Christopher Leung: Our team did really well last year and we’re not losing that many seniors, so I expect us to do pretty well again. Hopefully we’ll be the top public school in CIF and I’m really excited to see how we’ll do this year.

Derek Hitchens: Northwood has a tradition of having some very fast swimmers, which has resulted in repeated league Championships, CIF and even a State Championship win, so expectations are set high with this team.

TH: Your 400 Free relay with alumni Jason Kim and sophomore Will Chen was a second off the school record when the 2022 season ended. What are your thoughts?

CL: We did have Jason graduate, but Will and Derek are young and rising sophomores so we just have to fill one more spot on the relay. But I’m pretty confident our Northwood team can do that pretty easily.

DH: Going into that race, we all were definitely nervous, but as Jason, Chris, Will and I hyped each other up, it seemed like there was nothing to fear.

TH: When did you start swimming and how come you’ve stuck with it for so long?

CL: I learned how to swim when I was 4 years old, but only started swimming competitively when I was 7. I’m not gonna lie, I was pretty reluctant my first couple years of swim. I started loving it during middle school and though I would like to say it’s a fun sport, it’s actually so hard. I think one of the only reasons why I can get through it is the friends I’ve made. Having friends to talk to or struggle with during practice is one of the things that keeps me going.

DH: When I first started swimming at the age of 5, just putting in the time to get comfortable in the water, learning my strokes and eventually start swimming laps was an accomplishment for me. It was not until a few years ago when I had a serious talk with my older brother, a former Northwood swimmer, that I realized I needed to start to take swimming seriously if I really wanted to improve. With that motivation to improve, swimming has become a part of who I am and I cannot think of letting that part of me go.

CL: Number one, I would say, is to reach out to the older kids. I know it might be a little scary, but I promise that all of us are nice. And if you’re scared to ask, the captains are always there to pump you up. It’s not going to be easy at the beginning, but I promise it’s gonna be worth it.

DH: Keep your academics and swimming organized. It’s hard academically sometimes to fit everything with your swimming, but finding the balance is key. Incoming freshmen really need to challenge themselves outside the water just as much as they do in the pool.