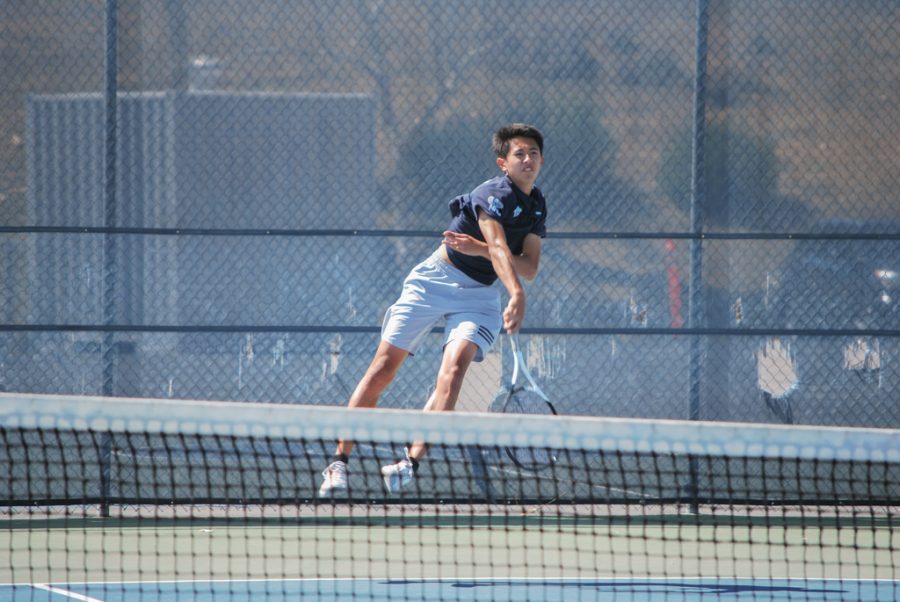 Senior Spencer Ho jumps to return the ball to the other side of the court during the CIF-SS match against Servite High School.

Northwood varsity boys tennis advanced through to the CIF-SS quarterfinals on May 9. The team scored 6-12 against Mira Costa High School, bringing a close to a 17-week season. Through intense wins and close losses during competitions, broken racket strings and lost tennis balls from powerful hits, and serious team meetings and joyful celebrations, the team closed out a strong season with the CIF-SS tournament.

The Division I team began the competition by defeating the Sage Hill High School boys varsity tennis team 15-3 on Wednesday, May 6, and winning 10-8 against Servite High School the following Friday.

“I am very proud of the team for making it to the quarterfinals,” captain senior Sumay Kalra said. “Of course, there was some tough competition in the last match, but I’m really glad that we got as far as we did.”

On April 25, in an extremely competitive game against Beckman High School varsity captains Spencer Ho and Sumay Kalra secured the team’s spot in the competition. The duo battled for the duration of the winner-take-all match, which was won by a difficult shot in the last round.

The team’s efforts have not gone unnoticed by their coaches who led the team through the busy four-month season including long practices, games and tournaments, during which they managed the team to optimize their performance.

“In the beginning of the season, we were a good team, but we definitely had a lot of potential to get better,” Coach Megan Mansonhing said. “I think that’s where the flexibility came in and everyone was really willing to switch it up, and it really showed in how we competed in our last matches of the season.”

This flexibility resulted in the athletes learning not only general athletics skills such as commitment and teamwork, but also the practical application of those skills on and off the court.

“I can play on both sides of the court and I excel in clutch situations,” sophomore Mark Richa said. “Pure willpower inspires me to keep going forward.”

Although the season has come to an end with the loss of the CIF-SS quarterfinals, the team continues to spend time together playing tennis and building long-lasting friendships. This camaraderie and team spirit is an integral feature of Northwood Athletics, and lends itself well to enhance the team’s performance in upcoming years as well.

“Throughout the season, our team did have many ups and downs,” Kalra said. “However, we ended with a positive record which signifies a great team effort and performance overall.”