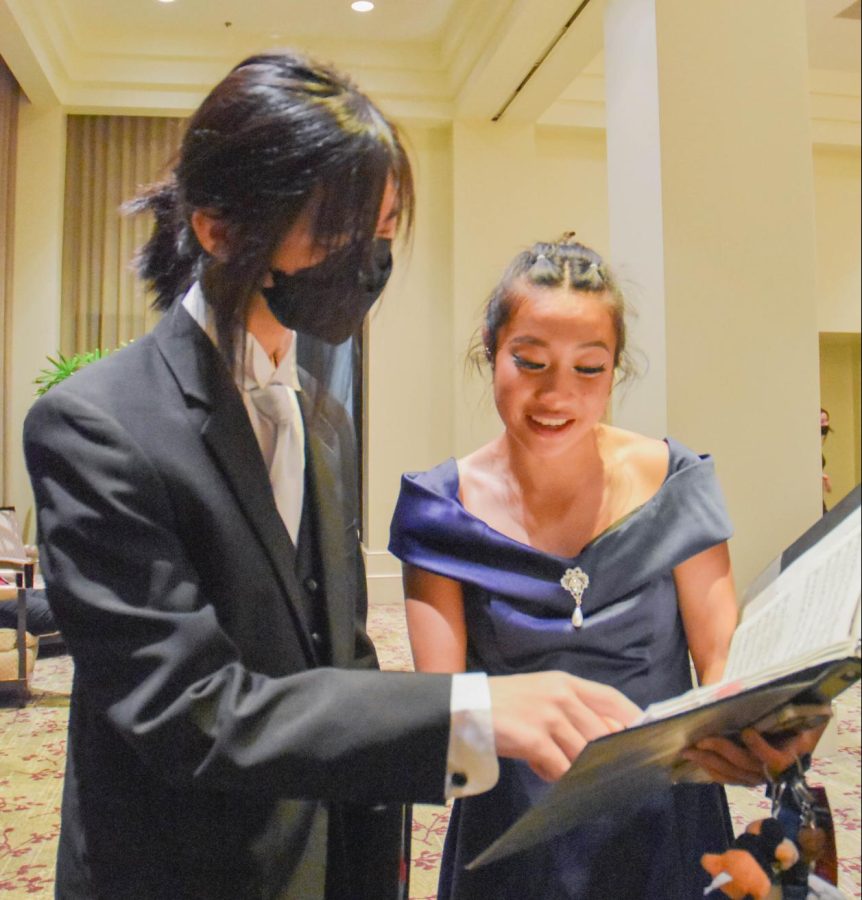 The elementary school students were herded onto the stage, fidgeting as they stood next to double basses several feet taller than themselves while the orchestra quickly tuned before the combined number encompassing the High School Honor Orchestra and all choir ensembles from elementary to high school. As the final amen of “Battle Hymn of the Republic” rang across the hall, the audience erupted in thunderous applause and hollering calls.

With an entirely sold-out house, the 38th Annual Donald Bren Honors Concert was held at the Renée and Henry Segerstrom Concert Hall on March 14 and celebrated the 50th anniversary of IUSD. Over 600 IUSD music students were featured in the concert, including Northwood student musicians from Chamber Singers, Philharmonic Orchestra and Wind Symphony in the High School Honor Chorus and High School Honor Orchestra.

“The venue never fails to impress me,” Honor Orchestra member senior Sarah Jaafar said. “The feeling of being able to go backstage is completely different than just watching a performance as a part of the audience.”

Featuring everything from spirituals to Beethoven overtures, the concert was a culmination of weeks of rehearsals by students and teachers. College professors came in for two rehearsals with the high school orchestra and chorus, allowing students to step out of their usual learning and have a taste of what it’s like to work with a different director.

“It was a really good learning experience,” Honor Chorus singer senior Albert Gao said. “I feel like I better understood some [musical] concepts after they were taught in a different way.”

The Honors Concert is an annual tradition of the district, with the proceeds from the concert used to financially support the IUSD music program. During the concert, Superintendent Terry Walker and IUSD Board Members accepted a $2 million contribution from the Irvine Company to IUSD as a part of a 20-year, $45 million commitment to support arts, music and science education in the district.

“Many school districts have drastically cut arts education over the last two decades, but IUSD’s program has flourished with community support like that of Irvine Company and its Chairman Donald Bren,” Walker said. “Tonight’s concert is a demonstration of this commitment, a commitment that has resulted in IUSD being named one of the nation’s Best Communities for Music Education by the NAMM Foundation for nine consecutive years.”

Although there was no Honors Concert for the past two years due to the pandemic, the concert highlights the skills and hard work of students, and will hopefully continue to showcase the wonderful work of the youth of today.

“We only had two rehearsals together and while challenging, it all came together during the performance,” Jaafar said. “I’m glad that within this short amount of time I was able to make new friends and memories.”