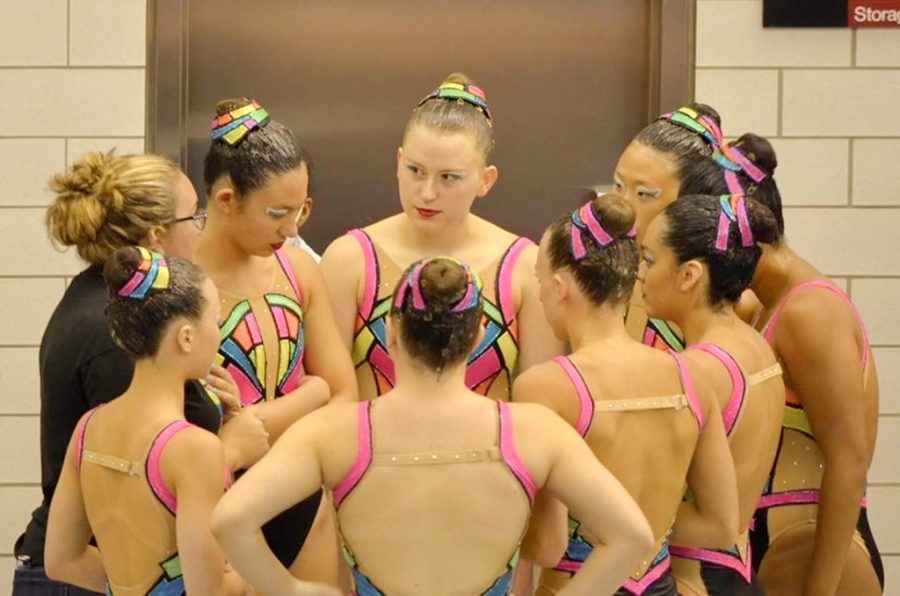 Tennis rackets sticking out of backpacks, students wearing matching navy blue tracksuits or groups of teens running laps on the track field make up the typical image of a student-athlete on campus. But among the infinite number of sports in the world, how do athletes of non-campus sports fit into Northwood?

Senior Amanda Carlson has been learning synchronized swimming since she was 8 years old, and has earned a national championships award with her team, Meraquas of Irvine. Because she doesn’t play a sport at school, many people are shocked to know that she plays a sport at such a high level.

“It’s always a good conversation starter when they ask if I’m on the swim team and I get to say ‘oh not that kind of swimmer,’” Carlson said. “It feels a little like a secret at times since I don’t broadcast it. It’s kinda like a cool trivia thing in that sense.”

However, with every sport comes great amounts of practice to make a good athlete, making it very difficult to balance school and sports. Since off-campus sports aren’t linked with Northwood, student-athletes involved with such sports often have to miss school in order to attend tournaments and competitions; grappling with such a challenge is fencer sophomore Madeline Huang.

“A lot of the time, it’s doing schoolwork at the airport, on the airplane and in between training, so it takes good time management to get schoolwork done on time, but it’s so worth it,” Huang said. “I love this sport so much and the community that comes with it. My closest friends are from fencing, and they also help me balance school and training.”

While not without its own difficulties, practicing sports outside of school offers students the independence to practice their sport individually. This allows student-athletes to create their own schedules, choosing how often they practice and what tournaments they compete in.

Junior Chohan Yim, who is a third-degree black belt in Taekwondo, practices for 40 minutes twice a week. She uses Taekwondo as a form of self-expression and reclamation of her physical self.

“I realized as I grew up that Taekwondo liberates me,” Yim said. “It does not impose social constraints, further proving that I did not have to limit myself to societal biases that I believed were true for a period of time.”

As is with sports universally, off-campus sports are about so much more than just the competition itself: They’re about the sense of community that the athletes gain and the lessons they learn from playing the sport, maintaining academic excellence and managing a unique schedule. The distinct experiences these athletes have give them memories and friendships they can cherish for a lifetime.

“I like when people are curious about what I spend so much of my time doing,” Carlson said. “It does feel pretty cool to be different from a typical high school student-athlete because it’s almost like I get to exist in two different worlds.”