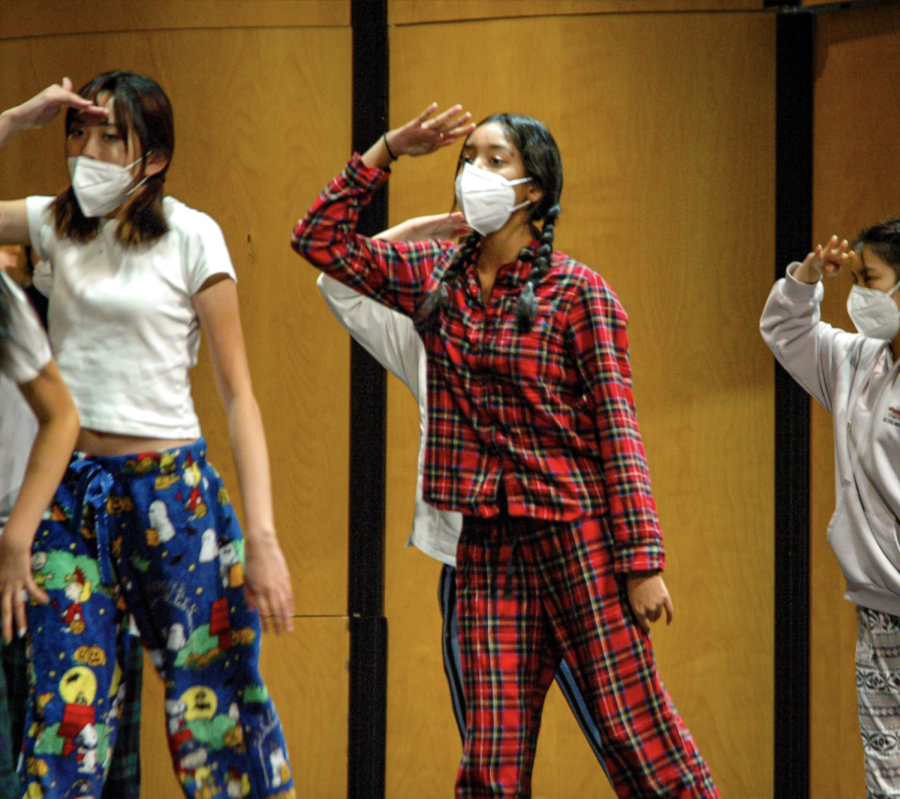 Bel Canto entertains the audience with an upbeat and humorous choralography of “Mister Santa” in pajama-themed costumes.

From captivating solos to performances that filled the theater with laughter, Northwood’s Winter Gala on Dec. 10 was a night to remember. At the first collective indoor concert since the pandemic began, the magic of Northwood’s musicians came back with a bang.

“Since this is my first time back to in-person school since the pandemic, I was highly looking forward to the Winter Gala because everyone was able to perform indoors on stage,” freshman Annie Song said. “I loved the concert so much since every performance added a special fun part to make it a holiday vibe.”

The concert showcased performances from all aspects of Northwood’s music program. Jazz Combo I and Jazz Ensemble I began the concert with their first performance since 2019, and were directly followed by an enthralling choralography performance from Treble Clef, Bel Canto, Bass Clef and Viva Cantar.

“Though it was a small high school band I was watching, it felt like I was sitting at a quiet table, eating dinner and watching the world around me fall silent for those talented musicians,” sophomore Keira Patel said.

Accompanied by Wind Symphony, Instrumental Music Director Ben Case enthralled the audience with the unique sound of the bagpipes in celebration of his 40th birthday that day, while Wind Symphony tuba player senior Simran Patel also fulfilled her goal of playing the drums on her 18th birthday.

“There were so many highlights from the concert, but if I have to pick my favorite one it’s definitely when Case was playing his bagpipes and the Philharmonic Orchestra performed ‘A Christmas Fantasy,’” Song said. “They were so surprising and that’s what made them special.”

Memorable moments from the Philharmonic Orchestra included English teacher Jason Mize playing on the drumset during “It’s the Most Wonderful Time of the Year,” while “Allegro non molto” from “Winter” led by concertmaster senior Miya Liu drew a standing ovation from the crowd.

The concert came to a close with the Chamber Singers and the rest of the choral program returning to the stage to join Philharmonic Orchestra for a rendition of “White Christmas.” The audience also was also treated with fresh snowfall during the finale, capping off a thrilling show of musical excellence.

The music department will next be performing at the Spring Festival Concerts which will be on Feb. 23, 24 and March 1 for concert bands, orchestra and vocal music, respectively. Be sure to keep an eye out for ticket sales to witness Northwood’s fantastic music programs firsthand.