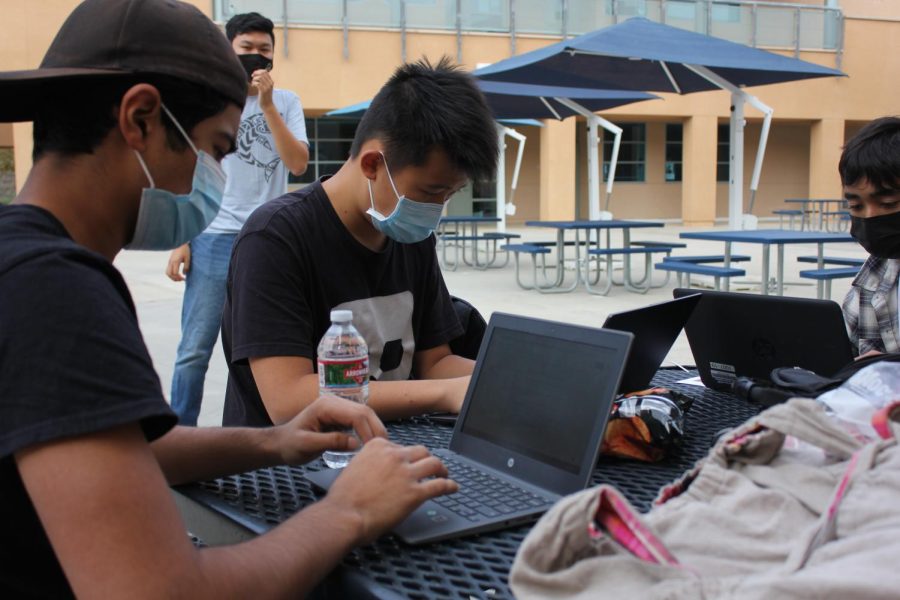 Put in the work, put in the hours: Debaters dilligently refine their cases with research and new pieces of evidence.

Part of Northwood’s intensive rigor comes not from just its academic curriculum, but also from the numerous extracurriculars that students partake in. Here are some of the distinctions that Northwood students have achieved in this past year.
Speech and Debate. Speech and Debate competed virtually at the Orange County Speech League tournament from Nov. 13-14.
Speech president senior Rey Shankar and junior Ellie Chan received first in speech events Oratorical Interpretation and Dramatic Interpretation, respectively. Senior Alex Fu also placed first in Policy Debate and Debate juniors president Anthara Thirupathi and Ananya Badari received first for Public Forum.
“The competition established my confidence as a novice to strive to become better with each tournament,” freshman Vincent Yang said.
Math Olympiad. The American Math Competition exam was administered by the Math Olympiad club on Nov. 10 and 16.
The club held weekly meetings to help members prepare for the test through tutoring and practice tests. Those who score above the qualifying score will be qualified to take the American Invitational Mathematics Examination, which the top 2.5% of high school students compete in.
“It’s delightful to see our students’ enthusiasm and passion for mathematics really shine during competitions,” Math Olympiad club president senior Andy Zhu said. “I look forward to celebrating their progress as the year continues.”
Mock Trial. Mock Trial will be advancing to the semifinals of the Constitutional Rights Foundation competition in February after winning matches against Costa Mesa High School and Corona Del Mar High School throughout November.
From practicing their objections to bolstering their witness testimonies, Mock Trial members have been diligently preparing for these trials since August.
“Competing in trials is always the best part. We all get to see what we’ve been putting so much effort into all come together,” tournament coordinator junior Janna Elshahawi said. “We’re really good at adding to each other’s ideas to make our argument as strong as it can be.”
Science Olympiad. Science Olympiad competed at the online Rickards Invitational on Nov. 7.
Sophomores Jeet Parikh and Pratik Kulkarni placed fourth in Wifi Lab, and sophomores Kristie To and Yutong Ke placed sixth in Ornithology. In addition, junior Annabel Tiong and sophomore Kristen Lew placed seventh in Cell Biology; Tiong also placed sixth in Codebusters with sophomore Derek Lee and junior Annie Lee, and fifth in Environmental Chemistry with sophomore Tanay Das.
“Getting back into the rhythm of juggling in-person schedules and meetings definitely wasn’t easy, but we were able to pull through,” captain senior Daniel Yang said. “Most of the Rickards team was made up of underclassmen, so I have high hopes not only for this year, but for future seasons as well.”