Watching Nevertheless was One of the Biggest Disappointments in my Life 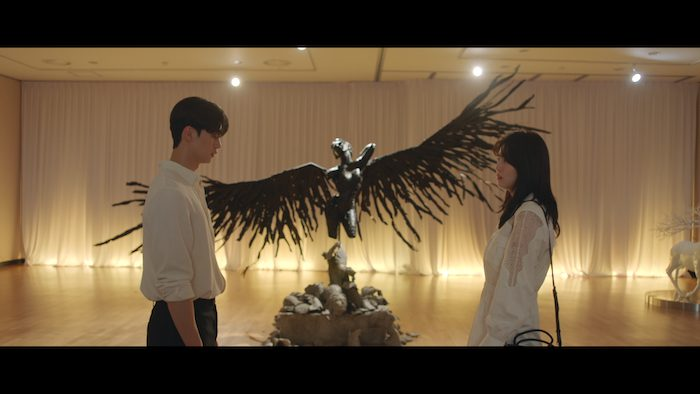 Na-bi and Jae-eon reunite in front of their sculpture in the final episode.

If I had to describe “Nevertheless” in one word, it would be bold. It covers hook-up culture. Amorous scenes. LGBTQ+ relationships. Raw emotions and realistic reactions. It checks countless boxes of uncommon elements in modern Asian dramas. One box left unchecked, however, is a meaning behind its aesthetics.

The 10-episode, Webtoon-based Korean drama on Netflix features Song Kang—the actor you see in every other Korean Netflix drama—as the first male lead Park Jae-eon, with actress Han So-hee—who also starred in “The World of the Married”—as the female protagonist Yoo Na-bi.

It’s a slow-paced, slice-of-life story centered around the relationship between Yoo Na-bi and Park Jae-eon, two art majors at the same university. While pursuing their artistic aspirations, they struggle with jealousy, miscommunication, wavering feelings and social pressures—all the conflicts you’d expect in a relationship but magnified. The second male lead and Na-bi’s childhood friend Yang Do-hyeok (Chae Jong Hyeop) then appears in the last half of the series to vie for her love. Though Do-hyeok embodies everything Jae-eon doesn’t—namely, compassion, understanding and kind-heartedness—Do-hyeok loses by virtue of the show’s adherence to the typical love triangle trope. In the end, Na-bi ends up with Jae-eon after the following exchange:

Na-bi: “I really hate you, and I know that you’re a jerk who toys with people’s feelings.”

This scene left me confounded in the worst way possible. It just doesn’t make any sense. The message it’s sending seems to be to repeat mistakes, ignore red flags and make bad decisions. This scene ultimately highlights the downfall of the plot and moral of the show, boiling down to merely romanticizing toxic relationships riddled with incongruent values, a lack of communication and little to no self-improvement.

Meanwhile, the three other subplots consisted of exploring the relationships between other characters of the show, and they were, for the most part, uninteresting clichés I definitely would’ve skipped if not for writing this review. However, the subplot with Yoon Sol (Lee Ho Jung) and Seo Ji Wan (Yoon Seo A), two female best friends majoring in art with Na-bi who gradually realize their mutual feelings for each other, proved to be the best story—and healthiest relationship—coming out of the show.

Now, the prevailing conceit throughout the entire show: the butterfly. Na-bi’s name translates to “butterfly” in Korean, Jae-eon has a butterfly tattoo on his neck, Jae-eon has a room of live butterflies and gifts Na-bi a butterfly charm bracelet and Na-bi’s exhibition piece in the final episode includes butterfly-like wings. It was everywhere in the show, to the point of being overdone and forced. Worse, it just amounted to signifying change: Na-bi “spread her wings” and developed confidence by the end of the show. For such an extensive motif, the substance behind the aesthetics did not live up to its presentation. A lot of the other stylistic choices in the show—including making all the characters art majors—didn’t seem to be supported with any meaning or add anything to the show and consequently, seemed arbitrary.

The only reason I would recommend watching Nevertheless is because the show’s artistry stands in a league of its own. The visualization of the screenplay, color grading and soundtrack are top-notch, enhancing the mood of every scene. The songs on the soundtrack truly gave me an out-of-body experience of unmatched tranquility. The actors are also extremely versatile, displaying immense nuance in everything from absolute heartbreak to pure joy.

All things considered, I’d say don’t watch the show unless your storytelling standards are low. Save yourself the desperate attempts of rationalizing the actions of the show’s unlikeable characters.