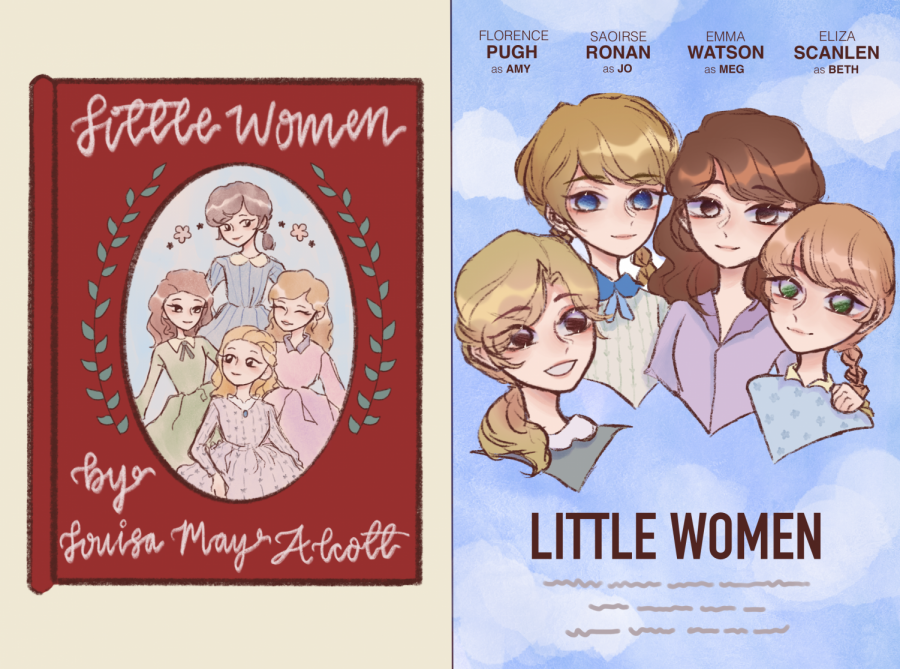 A timeless classic inspired by Louisa May Alcott’s own family, “Little Women,” traces the lives of the four March sisters from childhood to adulthood. Early on in the novel, the four sisters befriend their neighbor, Theodore (Laurie) Lawrence, who develops a close relationship with the March sisters and becomes an integral part of their daily lives, making mischief and helping them out of scrapes. Each sister has her own interests and aspirations that she pursues throughout the course of the novel, such as Jo’s passion for writing and Amy’s artistic endeavors. Since its release, the novel has been made into several movies, the most recent a 2019 remake directed by Greta Gerwig. Although the core story remains the same in both, each medium brings its own set of merits, flaws and differing perspectives.

“Little Women” has withstood the test of time because of its overarching themes of love and loyalty that readers today identify with. The intimate relationships that make up the March sisters’ story are depicted in many scenes which the 2019 movie modifies in favor of lines that advance its feminist narrative. Aunt March’s passionate declaration against Meg’s marriage to John Brooke due to concerns for her niece’s wellbeing is lost, as is Friedrich Bhaer’s father-like personality. Instead, Bhaer is portrayed as more straightforward, directly criticizing Jo’s writing instead of subtly encouraging her to write stories she is proud of.

While some of the characters are stagnant, others undergo character arcs, for instance in the case of Amy March. At the beginning of the novel, she is a spoiled 12-year-old who comes across as spiteful, but she matures into one of the most engaging characters. In the novel, after Beth recovers and Amy returns home from Aunt March’s house, she has a sincere talk with her mother about ridding herself of selfishness and wearing a turquoise ring as a reminder of her promise. This brief scene reveals her genuine desire and efforts to improve herself, and it is these details that provide insight into each girl’s personal emotions that are lost in the most recent movie  adaptation.

Unfortunately, many of the women in this story seem to look to marriage as their ultimate goal, with even rebellious Jo eventually settling down. While this sentiment is no longer reflected today, where fulfillment can be found outside of married life, it is still reassuring to see that all three women marry out of love and compatibility rather than for materialistic reasons such as wealth or social status. In a love story that the film shortens significantly, Meg falls in love with Brooke and eventually realizes that her love for him is unaffected by his lack of money, emphasizing the theme that marriage should build off true devotion.

Overall, “Little Women” presents an enrapturing story despite some of its outdated concepts. The novel preserves Alcott’s initial vision of portraying the challenges that young women of the period faced with small nuisances that the film fails to capture.

The 2019 movie adaptation of Alcott’s “Little Women” is a coming-of-age drama set in the 19th century. As one of the many adaptations of the novel, director and screenwriter Greta Gerwig had no easy job creating a fresh take on this classic.

The most innovative aspect of the film by far is the structure of the timeline, jumping between the past and the present rather than following a straight timeline narrative as the book does. The past timeline comes from the beginning of the original novel, set during the Civil War years in Massachusetts, when the four March sisters and their mother struggle while their father fights in the front lines. The present timeline contains the second half of the novel, where Jo has moved into the city to teach and write, and each March sister has gone her separate way.

To differentiate the timelines, Gerwig uses distinct color palettes, filling the past with warm and radiant colors, while the present is pale and colorless. Surprisingly, splitting the story into two separate plots doesn’t detract from the realism or the characters’ emotions. In fact, seeing the backstories of each character as it parallels the present heightens the emotional experience of the viewer.

Another aspect that sets this adaptation apart is the humor, which complements the emotional ups and downs of the rest of the movie. Gerwig added in some comedic elements, but also  highlighted the humor Alcott included in the text. For example, having Meryl Streep portray the wealthy Aunt March helps viewers understand how old-fashioned it is to believe that women’s only happiness is found in marriage.

Like in the novel, Jo marries at the end of the movie. However, Jo is not only a woman in love, but also a fearless author who isn’t afraid to stand up for herself. Gerwig’s take on an outdated ending captures Alcott’s initial spirit and feminist ideals, inspiring a new generation to pursue  their own aspirations, just like these four little women.