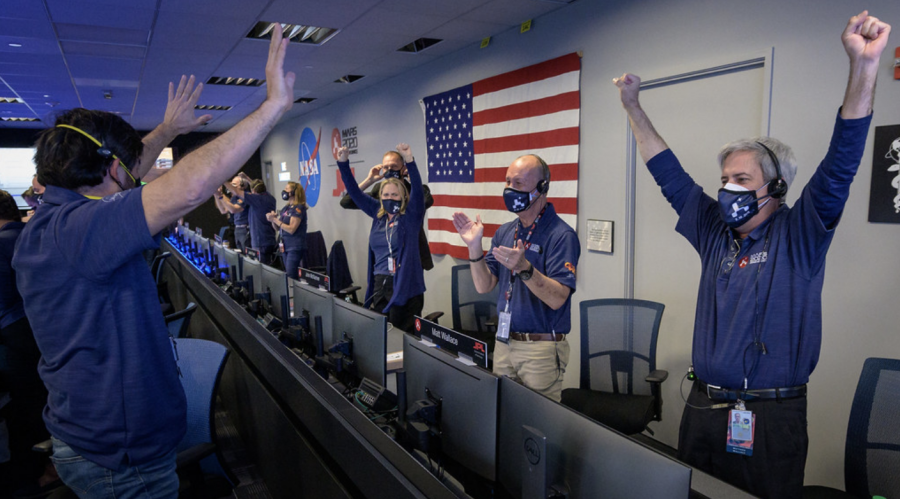 NASA successfully landed Perseverance, a rover that will search for traces of ancient life on Mars, on Feb. 18, in what was described as seven minutes of terror as the rover navigated a complex, rugged crater.

The success marks a new era of Mars exploration as Perseverance collects data about the planet’s history and evolution. Perseverance will not only take pictures of its surroundings, but also collect core samples of Martian rocks and sediments to later be brought to Earth, making its landing the first part of a broader initiative to test Mars’ habitability.

“Perseverance is NASA’s most ambitious Mars rover yet, focused scientifically on finding out whether there was any life on Mars in the past,” associate administrator for the Science Mission Directorate at NASA Thomas Zurbuchen said. “To answer this question, the team will be busy getting us to Jerezo crater—the most challenging Martian terrain ever targeted for a landing.”

Jezero crater could be encrusted with carbonate materials, which are excellent at preserving fossilized life on Earth. Perseverance’s primary goal is to drill into the crater and search for biosignatures, or traces of organic matter. While searching for evidence of life, the rover will also monitor dust storms, conduct experiments on oxygen levels and take measurements of Martian weather—all of which is crucial information if NASA is to send astronauts or later genuine inhabitants to Mars.

NASA has described Perseverance primarily as an astrobiology experiment that aims to answer fundamental questions about life in the solar system and beyond. Finding evidence of prior life on Mars could affirm the existence of life outside our solar system, but even if this is not confirmed, the mission will still be valuable for NASA.

“We have strong evidence that Jezero Crater once had the ingredients for life,” deputy project scientist for Perseverance Ken Williford said. “Even if we conclude after a returned sample analysis that the lake was uninhabited, we will have learned something important about the reach of life in the cosmos.”

After Perseverance collects its samples, a subsequent mission will deploy a small rover to retrieve them and launch them into orbit. The final mission will capture the samples from orbit around Mars and bring them to Earth approximately by 2031, making Perseverance the first man-made object to both land on Mars and return to Earth.

“Perseverance is just getting started, and already has provided some of the most iconic visuals in space exploration history,” NASA administrator Steve Jurcyzk said. “It reinforces the remarkable level of engineering and precision that is required to build and fly a vehicle to the Red Planet.”