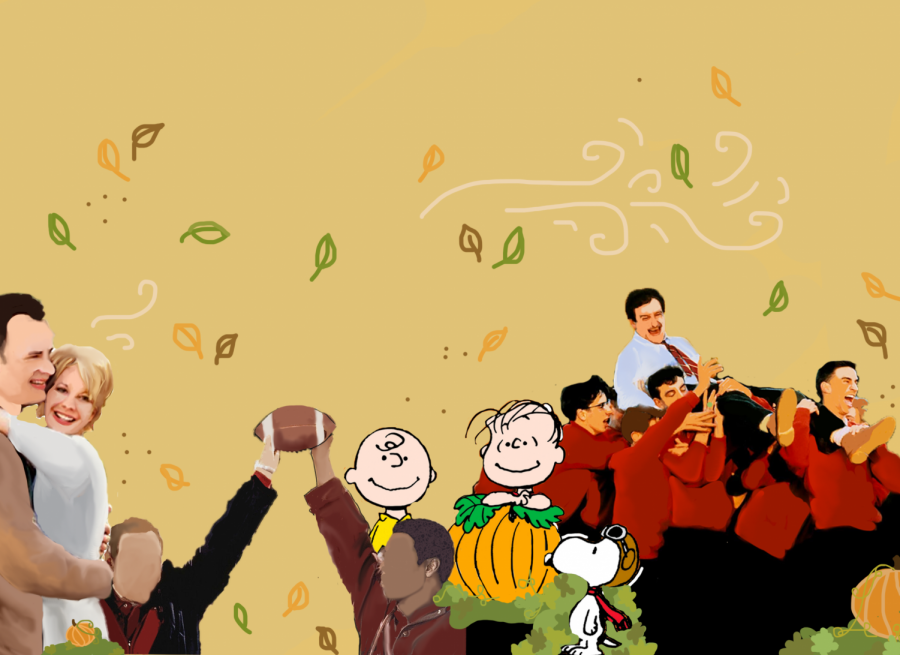 The change in season brings dew that gilds the changing leaves and refreshment for summer’s swelter. Fall has arrived, and along with it, pumpkin spice lattes are brewed, picnics are held and jack-o’-lanterns are carved. The emerging chilly breeze means that it’s also time to snuggle up and enjoy some seasonal movies, so here are a few fall movie recommendations ranging all the way from romance to drama to cartoons.

Travel back to the 90s and sightsee through the lens of a classic romantic comedy, following the timeless love story between Kathleen Kelly (Meg Ryan) and Joe Fox (Tom Hanks), both owners of bookstores who meet in an AOL chatroom. After several email exchanges revealing deep secrets but omitting personal information, they set off a fervent online connection under the screen names “Shopgirl” and “NY152,” oblivious to each other’s identities.

Funnily enough, while their online personas unwittingly fall in love, the two meet in real life. Not knowing who she is, Joe puts Kathleen’s small bookstore out of business, and the two grow to hate each other. The movie is two lively hours of dramatic irony as their online secrets unravel and real-life relationship sparks.

Available on Amazon Prime Video, this movie combines bulky computers and Windows 98 icons with heartwarming romance to create the perfect recipe for a movie night that will leave you romanticizing your life for the next few days.

Fall means football, and as the infamous teen drama “Riverdale” once said, “You haven’t known the triumphs and defeats, the epic highs and lows of high school football.”

Similar to the many epic tales of sporting triumphs like “Varsity Blues,” “Rudy” and “The Blind Side,” “Remember the Titans” has a competitive intensity but incorporates a unique twist. Set in the 1970s, the film portrays racial tensions on the football fields of the integrated T. C. Williams High School in Alexandria, Virginia. The coaches Herman Boone (Denzel Washington) and Bill  Yoast (Will Patton) work together to unify the white and black team members to achieve stunning victories.

This movie, now streaming on Disney+, is truly multidimensional and will elicit many different emotions from heartbreaking agony to all-time highs. “Remember the Titans” isn’t just about football: it tackles historical desegregation and race relations, which become increasingly important to understand.

As the weather cools and school starts, “Dead Poets Society” will help  you start off your school year inspired and hopeful. The 1989 American teen drama film is directed by Peter Weir and stars Robin Williams, who delivered an emotional performance as one of the greatest fictional teachers of all time, John Keating. Set in 1959 at a conservative, all-boys boarding school on the East Coast, Keating uses unorthodox teaching methods in his English classroom and inspires artistry in an environment brewing total discipline and tradition.

The film produced powerful messages that are still quoted to this day including, “Carpe diem. Seize the day, boys. Make your lives extraordinary,” and, “But poetry, beauty, romance, love, these are what we stay alive for.”

You can find this movie on Amazon Prime Video, and watching it might just change your world view or lead to a life changing self-discovery. In any case, experiencing this film will encourage your creative individualism, which may prompt some insightful commentary for your upcoming English essay.

From this television special came Linus Van Pelt’s famous retort: “There are three things I have learned never to discuss with people: religion, politics, and the Great Pumpkin.”

Charlie Brown was a cultural reset. Originating in the 1940s “Peanuts” comic strips by Charles M. Schulz, Charlie Brown has persisted through the past decades in the “Peanuts” television specials and films like “Snoopy, Come Home” (1972) and “The Peanuts Movie” (2015). He’s remembered as one of the greatest American archetypes: a meek, nervous boy surrounded by his friends, family and dog Snoopy.

Available on archives.org and Hulu along with the other Charlie Brown episodes, the 25-minute Halloween special “It’s the Great Pumpkin, Charlie Brown” covers Charlie Brown and his friends preparing for Halloween as they adventure to the pumpkin patch, dress up in ghost costumes and go trick-or-treating.

This film is a feel-good cartoon that will get you ready for the coziness of fall. It is nostalgic in a way that makes you reminisce on a childhood you’ve never had, and it’s a mellow classic perfect for watching with friends and family.