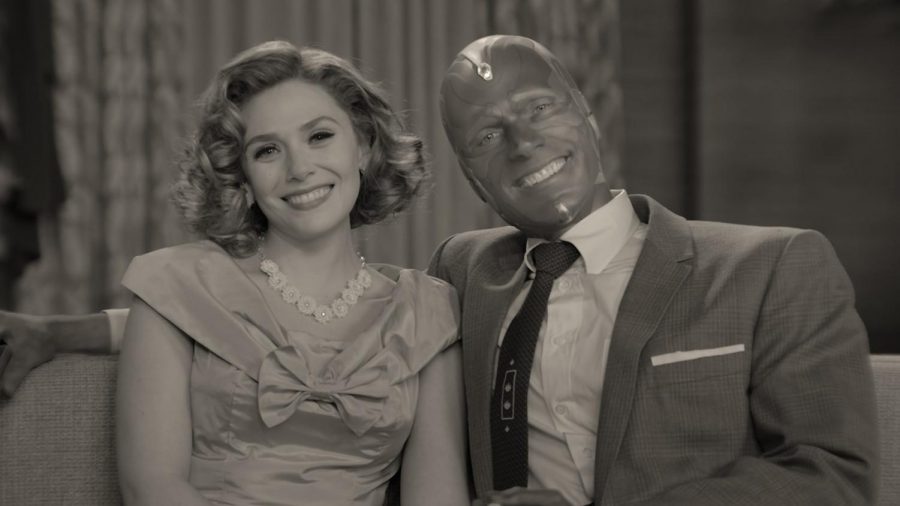 “Wandavision” made its debut on Jan. 15, commencing Phase Four of the MCU on a peculiar, but enchanting, note.

As the Marvel Cinematic Universe begins a transition into Phase Four of its trademark movies and TV shows, screenwriter and director Jac Schaeffer orchestrated one of Marvel’s most daring and enigmatic series to date: “Wandavision.”

The show’s first two episodes premiered on Disney+ on Jan. 15 are formulated around a campy sitcom concept that most Marvel fans don’t expect from the typical high-tension, action-packed universe. Indeed, nearly every aspect of “Wandavision” is unexpected. Who would’ve known that the first glimpse into the infinite possibilities that Marvel Phase Four offers would be two Avengers side characters being portrayed as a married couple living in an anachronistic 20th century sitcom?

As depicted in the first episode, Wanda Maximoff (Elizabeth Olsen) and Vision (Paul Bettany) are a couple that have just moved into a well-kept neighborhood. Their main objectives are to assimilate into suburban life and  keep their superpowers from affable neighbors such as Agnes (Kathryn Hahn), a particularly eccentric character who sparks an immediate friendship with Wanda. The plot focuses on the funny circumstances brought on by Wanda and Vision attempting to uphold a facade of a normal couple when Vision invites his boss over to his house for dinner.

The second episode centralizes around the couple’s decision to participate in the neighborhood talent show, and introduces other prominent characters such as Monica (Teyonah Parris), another neighbor of the Vision residence. Although the two episodes follow storylines bombarded with humorous sitcom tropes, it grows ever more apparent that the seemingly wholesome lifestyle of the couple has disturbing, rather sinister undertones that poke their heads out near the end of each episode.

Clues pointing to darker themes in “Wandavision” already reveal themselves in the first episode when both of the titular characters seem to be ignorant of their wedding anniversary or favorite song. The feeling of creeping dread that comes with these realizations are almost immediately washed away by antiquated jokes and gags that bring Wanda and Vision back into their cheerful, idyllic reality. As the show progresses, the audience should expect a gradual unraveling of the mysteries presented early on.

The talented acting and camerawork incorporating components of the oldened multi-camera sitcom format give an almost seamless display of the idea that reality isn’t always as it seems. Many critics and Marvel fanatics speculate that the characters are actually victims of an elaborate mindtrick controlled by Wanda herself subsequent to the events of “Avengers: Endgame,” forcing them to live within the confines of a sitcom reality without their knowledge. If this is true, the cheesy pratfalls and canned laugh tracks that the first two episodes implemented were successful in introducing the fabricated world that the characters find themselves trapped in.

As only two episodes have been released, “Wandavision” has potential to become the most bizarrely genius piece of media that Marvel has ever come up with. It pays homage to the television entertainment of the last century in an innovative approach to give Marvel fans much-needed content after so many months of superhero absence. The excellent chemistry between the two leads and the strong sense of secrecy and danger in “Wandavision” is sure to make audiences tune in to new episodes released on a weekly basis for the upcoming seven weeks.