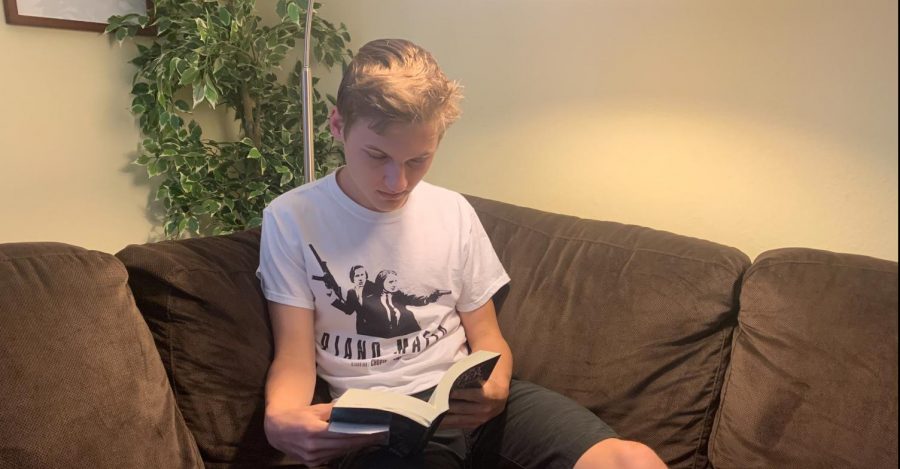 During quarantine, some baked masterpieces, some went viral on Tiktok and others just caught up on sorely-needed sleep. Senior Caden Hornyak spent his quarantine reading, and he is currently on “Deathly Hallows.” But there’s a catch—he’s reading the series entirely in Spanish.

Of course, reading an entire series in a nonnative language was by no means easy for him. When Hornyak first took Spanish 1 as a freshman, he only took it as a graduation requirement, not at all aiming for fluency. It wasn’t until he came across a Youtube video of polyglot Ikenna speaking to strangers in multiple languages that Hornyak changed his perspective about learning Spanish.

“Watching him talk with a lot of people, switching languages left and right, was pretty awesome,” Hornyak said. “Something switched in me and I was really motivated to speak Spanish.”

During quarantine, Hornyak began to practice his Spanish—on his own by reading in Spanish and using Spanish-learning apps, practicing with others by regularly conversing with coworkers at his afterschool job and people online.

“I made a bunch of friends I could play games online with, so that really helps,” Hornyak said. “Right now, I’m still making new friends, and they know that I’m learning Spanish, so they’ll speak it to me.”

His efforts throughout quarantine led to massive improvements in his Spanish, impressing even his Spanish teachers.

“I was blown away to see how much his Spanish had improved when he came to chat with me in Spanish in person,” Spanish teacher Luc Landeis said. “His progress is greater than what I have ever seen in a student over such a short period of time.”

When asked about advice for students who wish to improve their language skills, Hornyak suggests having a goal in mind and considering why they want to learn a new language to motivate themselves.

“If you motivate yourself because you want to speak to other people better, that definitely helps,” Hornyak said.

“By doing what you enjoy, you can really build fluency,” Tijerino said. “Caden is a great example of how practicing and not being scared to speak Spanish can really help you communicate in the international word we live in.”

Despite already taking Honors Spanish 4, Hornyak is also currently taking French at school, starting his journey towards becoming a polyglot. By mastering the languages of the world, he hopes he can form better relationships with the people around him and form connections with new people.