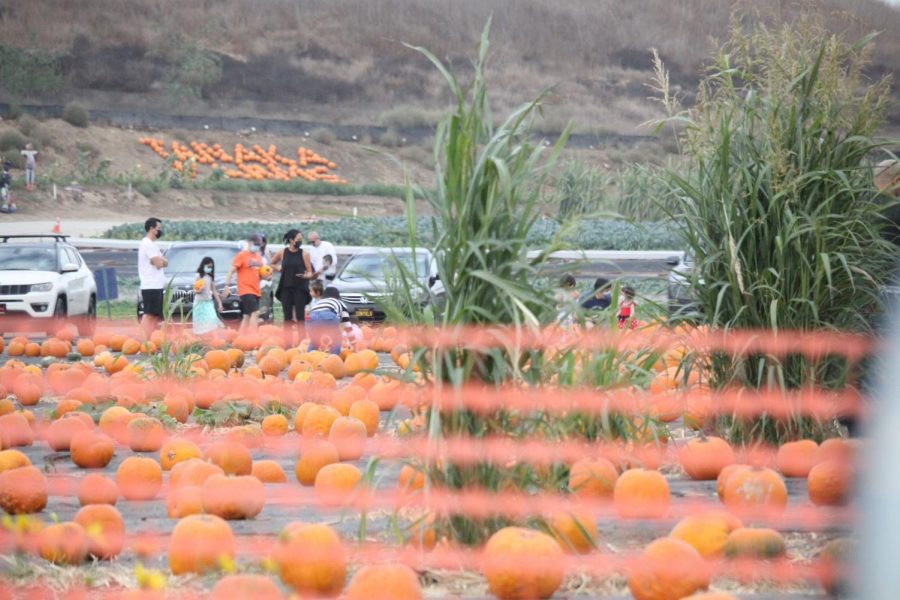 HAVING A GOURD TIME: Masked and socially distanced, families and friends frolic among the rich orange pumpkins and leafy greenery, searching for the perfect pumpkin to complete their afternoon at Tanaka Farms.

Even if we might not be able to go around stuffing our pillowcases with candy this Halloween, nothing is stopping you from picking your own pumpkin to carve. Tanaka Farms offers a fun way for a traditional pumpkin-picking experience while maintaining a safe distance from those around you. While the experience may be lackluster to some other Halloween events, it doesn’t mean it won’t be an enjoyable experience.

I first had to make an appointment on Tanaka Farm’s website, with the choice between their U-Pick Pumpkin Wagon Ride on the weekdays or the Drive-Thru Pumpkin Patch on the weekends. I found registering to be relatively quick and easy. All I had to do was pick out the time slot and select how many passengers would be with me. I was then emailed the date and time, a QR code and helpful information about the experience.

Pulling up to the bumpy dirt road of Tanaka Farms, I simply showed an employee directing traffic my QR code and I was signed in instantly. It took less than 30 seconds, which I found nice, as I was eager to pick out a pumpkin. The employee also gave me a scavenger hunt to do as well as a raffle ticket for two tickets for a farm tour.

As I approached the entrance of the drive-thru, I could see a line of cars in front of me. The amount of cars made the ride towards the pumpkin patch a bit slow but the scavenger hunt made it easy to pass the time. Along the way, enthusiastic employees gave me delectable treats of roasted pumpkin seeds and candy corn. They were wrapped in tiny plastic bags and were tied up with string, which was a nice touch to an already tasty snack.

The 1.5 miles of road towards the pumpkin patch were filled with colorful decorations of fruits and vegetables with interesting facts about them. Other than those decorations, the scenery along the road was lackluster, and there wasn’t much look at other than the acres of farmland, strawberry plants and the surrounding houses nearby.

I eventually reached the main attraction: the pumpkin field. As I stood before the rows of pumpkins, it felt like the start of autumn with the cooler temperatures and cloudless sky. It was the best time to take pictures, but it seemed like everybody else had the same idea, since it was so crowded. I waited a bit for the crowd to die down a bit but there was a seven minute time limit. After it was clear, I was able to take a few pictures with a scenic background of all the pumpkins.

After the time was up, I headed down the road and there were a few other attractions to see like “Tanaka Farms” spelled out with pumpkins and scarecrows that people made. I also went through a drive-thru area that had a donkey and little pigs running around their pen. At the end of the experience was a store filled with Tanaka Farms merchandise like hats and shirts. There were also pumpkin carvers for sale and produce from the farm. There’s vegetables like carrots, beets, kale and cucumbers. They also sell strawberry, peach and apple pie jam. The store even had pumpkins being sold a dollar per pound, which could be a better deal than other pumpkins in grocery stores.

Overall, the experience was enjoyable but in my opinion it wasn’t worth $20. I did not particularly enjoy being stuck in traffic to head to a pumpkin patch. It might be well worth your money to head to a haunted drive thru instead and buy some pumpkins on the way home.