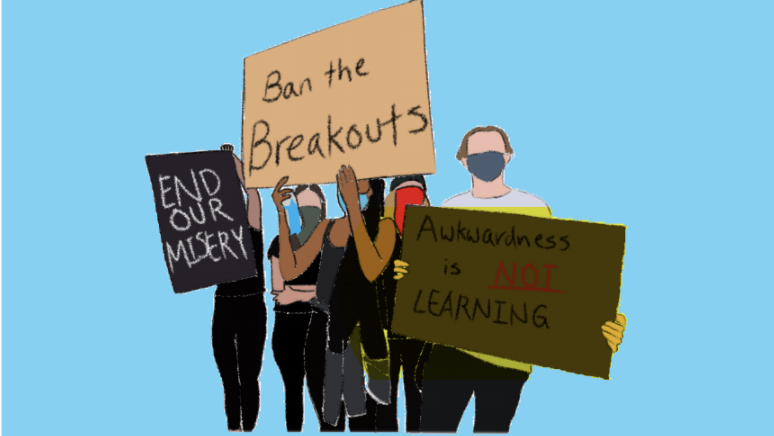 Freshmen Rangi Thimor and Regina Malbarru have taken the Internet by storm with a Change.org petition that calls on the US government to immediately ban Zoom breakout rooms, which Malbarru calls painfully awkward, physically intolerable and laughably ineffective.

The petition quickly gained traction, even earning the support of the national organization “Breakout from Breakout Rooms,” composed of dedicated high schoolers and college students protesting the very existence of breakout rooms. There have been organized protests in which students log off Zoom and join Google Meet instead. Experienced hackers have found ways to transfer host privileges from teachers to the students, who disable breakout rooms and even kick out teachers who rely too much on them. Others have taken to the streets, physically throwing away their computers solely to give an excuse not to use breakout rooms.

Thimor and Malbarru report that countless students from across the country have sent them emails thanking them for their initiative, when nobody else had the courage to stand up.

“I mean, I would keep hearing about all my peers that started nonprofit organizations, raised money for charity and helped tutor underprivileged kids, and it really made me want to give back to my community,” Thimor said. “After some thinking, I realized that every since a week ago, I have always hated breakout rooms. From then on, I pledged my life to saving the world from the virus that is breakout rooms to make a real difference in people’s lives.”

Thimor is certainly not alone in his feelings towards breakout rooms; a survey conducted by Pewpewpew Research Center found that over 82% of students who used breakout rooms had suddenly developed a fear of any kind of socialization.

“It’s no surprise,” said Harvard Medical school professor Kovinda Ninteena. “We’re calling it the breakout effect, or Zo-vid-19. These poor kids are being forced time and time again into breakout rooms only to mute their microphone and camera. Two students try talking, they talk over each other and get all flustered and just mute. Another unmutes, and their audio starts glitching out. Students are clearly uncomfortable, and it’s impacting them on both a personal and spiritual level.

The petition has garnered over 764,000 signatures, with countless students sharing stories about their failed experiences with breakout rooms in the comment section. Among the most common include the infamous “I didn’t know I was muted” scenario, in which one student presented a five minute speech without knowing he was muted, and the always hilarious “I thought I was muted” situation, in which another made the mistake of playing video games with loud audio. The effort to ban breakout rooms has also gathered roughly $20,000 in funds from the angry, socially-awkward students supporting the movement, though it is unclear what the money would even be used for.

But not everyone supports the movement. Fed up with students logging off their Zoom meetings, a group of teachers from Southern California have created a Change.org petition to ban all Change.org petitions, claiming the petitions were interrupting the flow of education.

“If the government can ban TikTok they can certainly ban Change. org,” one of the teachers said. “It’s an evil, vicious site that encourages harmful behavior in our young, innocent students.”

The students led by Malbarru and Thimor refuse to back down, noting that over 10,000 breakout rooms are being created every day. They pledge to not stop until that figure lowers to zero.

To get involved with the “Breakout from Breakout Rooms” Movement, reach out to a local coordinator in your area.