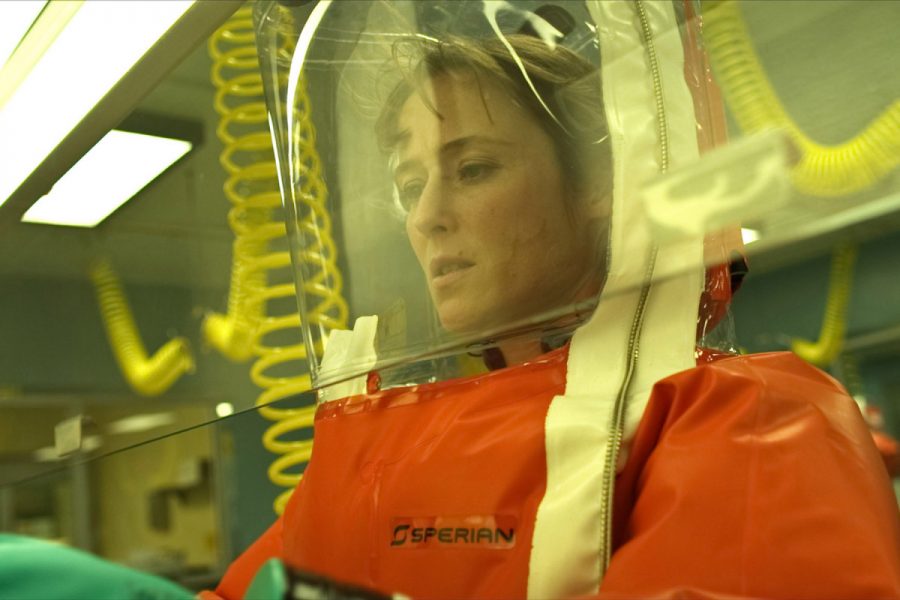 ENDLESS WORK: Dr. Ally Hextall works in a lab to find the origins of the virus to develop a vaccine in “Contagion.”

As the coronavirus pandemic has forced us to stay within our homes, here are few movies that will send a shiver down your spine, but leave a meaningful message about humanity’s resilience.

This thrilling zombie film follows a group fighting for survival as a zombie outbreak runs rampant in South Korea. Seok-woo (Gong Yoo) is a divorced father and workaholic which strains his relationship with his daughter, Su-an (Kim Su-an) to the extent where she wants to celebrate her birthday with her mother, rather than her father. As they board the train to head to Busan, a zombie manages to get on board, quickly infecting passengers. Luckily, a few passengers are able to isolate themselves from the zombie horde, but the danger has not passed. Now the question becomes if the passengers can quickly find a safe zone before the zombie outbreak spreads even more.

Contagion is a movie that portrays the modern issues and consequences of a pandemic ranging from civil unrest to fake news. The film is formatted by the number of days that passed after the virus first spread. Two days after returning from Hong Kong, Beth Emhoff (Gwyneth Paltrow) is dead. She is the first victim of an unknown virus, which has now begun spreading rapidly through the community. These first cases catch the eyes of the Department of Homeland Security and Dr. Ellis Cheever (Laurence Fishburne) of the Centers for Disease Control and Prevention (CDC), who respond with quarantines and medical camps. As the death toll continues to rise, World Health Organization (WHO) epidemiologist Dr. Leonora Orantes (Marion Cotillard) investigates the origin of the virus with only unfruitful results. Other scientists, such as Dr. Ally Hextail, work to develop a cure. Despite the efforts of many individuals, major cities are in lockdown and violence spreads. Will humanity prevail or succumb to the deadly virus?

What was once the bustling city of New York turns into a wasteland due to the arrival of the Cloverfield monster. During this wake of destruction, Hud (T.J. Miller) films a group of New Yorkers struggling to reach safety during the monster’s attack. Prior to this at Robert Hawkins’ (Michael Stahl-David) farewell party, news of a capsized vessel in the harbor draws the attention of partygoers. This small incident escalates dramatically as a shadowy creature rises from the ocean and spreads its terror in Manhattan. At the same time, smaller parasites spread a dangerous virus through bites on the skin. The group now rushes to save Beth McIntyre (Odette Yustman) who is trapped underneath the rubble of her apartment. After rescuing her, they have a limited time to reach the evacuation point before the military will bomb the creature. Whether they survive or not, you will find out in the movie.