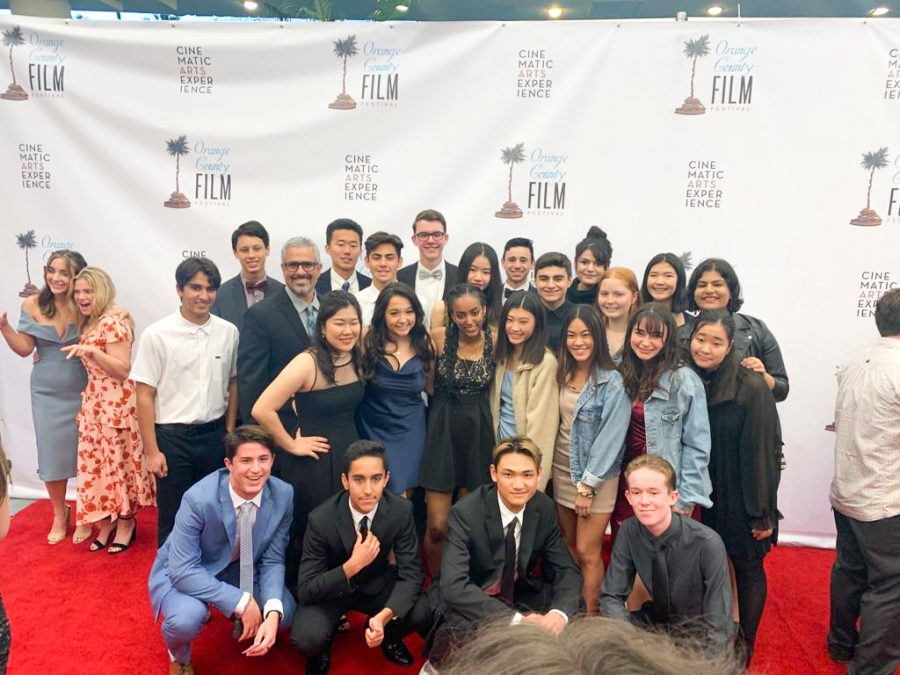 RED CARPET READY: The NTV crew smiles proudly in front of the cameras as they go home with three awards and 10 nominations.

A talented array of aspiring filmmakers, actors and editors from Northwood High School’s very own NTV was recognized for their abilities on Feb. 15 with their successes at the annual Orange County Film Festival (OCFF). The proud Timberwolves took home three trophies: senior Justin Hong for Best Producer, senior Yukako Fujimori for Best Independent Film and NTV advisor Steven Sellwood for Mentor of the Year.

“Quite honestly, I was very surprised,” Sellwood said. “I didn’t even know that I was nominated for the award. I’m very thankful.”

With 10 total nominations this year, Northwood’s success in the festival can be attributed, aside from natural talent and hard work, to Sellwood’s years of experience and exceptional guidance for his students. Judges based the decision to award Sellwood on many positive interviews with the Northwood administration as well as current and former students.

“I really like how Mr. Sellwood always encourages us to take risks and get out of our comfort zone,” NTV side cameraman junior Melanie Judd said.

Throughout the course of the school year, Northwood film students submit their best work to the FilmEd Academy of Arts, a school that annually hosts the OCFF. FilmEd nominates the best high school filmographers in the county for the festival.

With 2020 being her third year as a part of FilmEd, Fujimori has gained remarkable knowledge about the art of film-making and shared her skill with the judges of OCFF. Her award-winning film, “One of U.S.,” depicted a sensitive time period following the bombing of Pearl Harbor in which Japanese-Americans had to choose between staying allegiant to their cultural roots or fighting for their American homeland.

“Watching all the student-made films over the years inspired me to tell my own stories as well,” Fujimori said. “Because of this I was able to make my own film telling the story of my people. I feel extremely fortunate to have been awarded Best Independent Film, and I can’t thank FilmEd enough.”

This touching story was intimately shot and captured the ambivalent emotions of the main actor and the true hopelessness of the situation. Fujimori’s decision to only include Japanese narration further demonstrated the creativity of her creation.

Similarly, Hong utilized a foreign language in his inventive film, ¿Ya Llegamos?, to his advantage. Portraying an example of illegal immigration into the United States, Hong’s story is one concerning human morality and the oftentimes substandard treatment of foreign people.

Due to the fact that the entire film was set on a boat 16-feet-long, Hong’s ability to effectively coordinate an original story despite setbacks that inevitably came with the setting became a crucial factor for his Best Producer win.

“We ran into many difficulties during the actual production of ¿Ya Llegamos?,” Hong said. “The main actress got very seasick and we had to schedule our filming around how she felt. The lighting was also difficult to keep consistent. Everything worked out great in the end, though.”

These two exceptional students tackled controversial issues with elegancy and were fittingly rewarded, but nothing can diminish the artistry that every Northwood nominee exhibited to be hand-picked by FilmEd.

“In total, there were 400 submissions from all over the county. I would say that Northwood being able to get 10 nominations this year is just as important to me as winning the whole thing,” Sellwood said.

Whether or not Northwood’s talented film production members went home with awards, the shared experience of viewing the works of Orange County’s up and coming filmmakers at OCFF was the greatest takeaway of the night. Students look forward to further pursuing their individual passions while harnessing their skills in anticipation for next year’s festival.