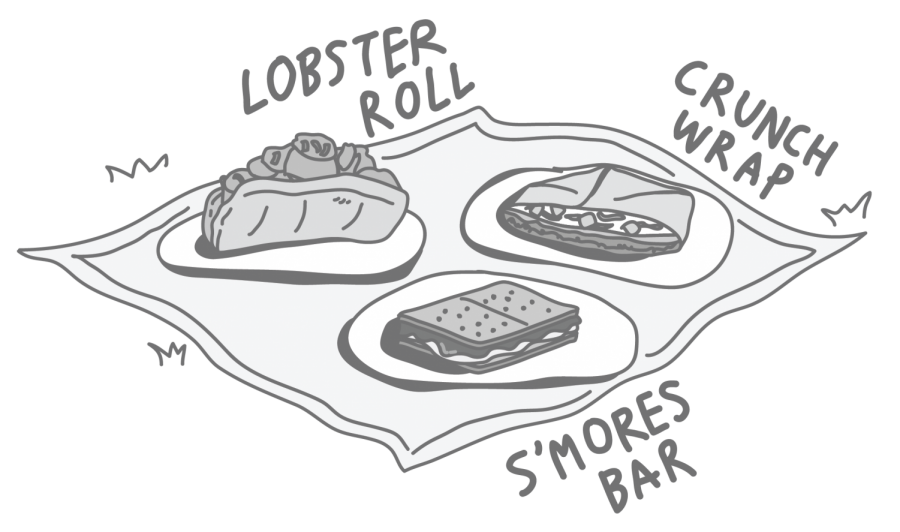 With spring approaching, there’s no better way to enjoy the fresh air and sunshine than with a picnic. However, a picnic isn’t complete without delicious food, so here are a couple of dishes to bring for your next outing. So, grab your family and friends to prepare for a feast!

These rolls are a seafood twist of the basic, traditional hotdog. They’re just as tasty and bring the coast closer to you. First, collect your supplies: a fourth of a cup of mayonnaise, two tablespoons of chopped chives, one tablespoon Dijon mustard, 1 1/4 pound of cooked lobster meat, a fifth of a cup of fresh lemon juice, hot dog buns, lettuce, salt and pepper. Take a bowl and mix the mayonnaise, chives, salt, pepper, Dijon mustard and lemon juice together. Next, cut the meat into large pieces and coat each piece evenly in the sauce. For the bread, butter the buns and cook them until they are golden brown and crispy. Finally, place the lettuce on the insides of the bun and fill it with the lobster. The lettuce will prevent the bread from becoming soggy. You can also customize it by adding cilantro and chipotle peppers in adobo sauce for some extra spice.

The name captures the dish perfectly: it’s crunchy, filled with veggies and a delicious addition to any picnic. It also isn’t hard to make, requiring common ingredients including a red onion, smoked chili paste, an avocado, two tomatoes, grated Monterey Jack cheese, two red peppers, four tortillas, black beans and tortilla chips. First, heat the chopped onion on a frying pan with a tablespoon of oil and add chili paste after the onions soften. Wait for a few minutes and then cook the chopped peppers and beans with the onions until they are heated thoroughly. After the mixture is complete, divide it equally onto the four tortillas and add the pieces of tomatoes, cheese, avocado and chips. Fold the tortilla together so that it’s packed and again cook it on the pan until the sides are golden brown. The filling doesn’t need to be restricted to these specific ingredients. Feel free to mix it up and modify the recipe according to your preferences.

Perfect for bigger groups, this gooey and chocolatey dessert will surely satisfy everyone’s sweet tooth. It captures the experience of camping and s’mores without the hassle, available for consumption anywhere. To make this, you’ll need two-thirds a cup of melted margarine, six tablespoons of sugar, three cups of graham cracker crumbs, two boxes of brownie mix, supplies to make those brownie mixes, four Hershey bars and six cups of marshmallows. Preheat your oven to 350 degrees Fahrenheit and mix the margarine, sugar and cracker crumbs. Take that mixture, press it onto a pan and bake it for ten minutes. After making the brownie mixture, pour it over the crust and bake it for another 25 minutes. Now that the foundation is complete, top the dish with marshmallows and let it broil in the oven until golden. Once complete, you can customize the bars with chocolate bars or any other candy of your choice. Personally, I feel the more chocolate the better. You truly can never have too much. However, I would suggest the adventurous to divide the sections of the tray into different flavors like caramel or peanut butter in one section and crumbled Oreos in another section. Mix and match to find the best batch.