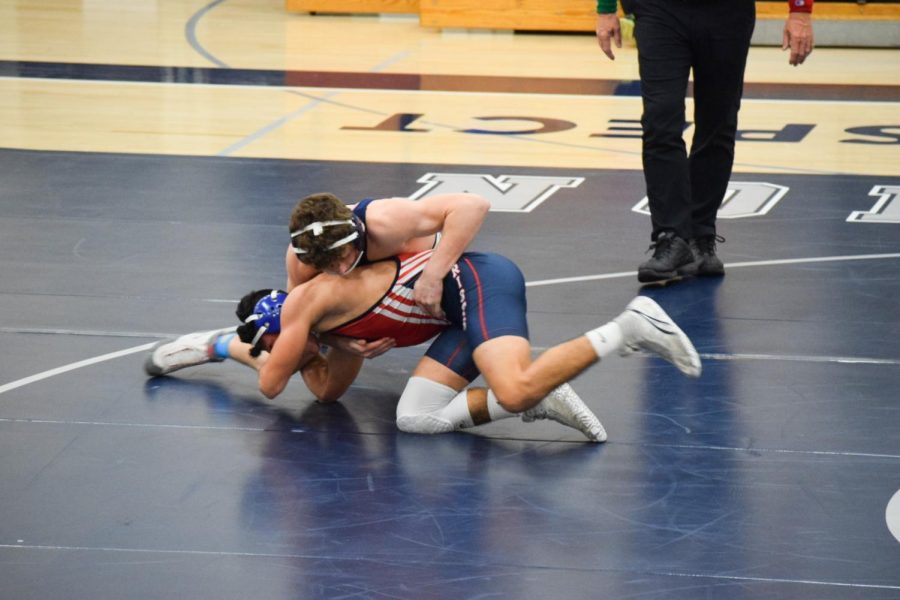 MAN DOWN!: A Northwood wrestler systematically pins down his opponent.

The shrill, high-pitched sound of the whistle echoed through the crowded gymnasium as the referee raised the arm of an exhausted victor. Cheers erupted from the Northwood section of the bleachers in a blur of white, silver and navy blue.

This process repeated throughout the rest of the Pacific Coast League Finals. At the end of the day, the team did exceptionally well, with junior Megna Chalamala and sophomore Aidan Freeland both winning first in their respective divisions, and a total of seven wrestlers placing in the top four seats of their respective weight classes.

At the start of the season, however, the team did not anticipate this level of success. The team was an underdog within a competitive league, averaging just nine wrestlers against the traditional 14. Furthermore, the majority of the short roster had no prior wrestling experience.

“Most of our kids are first-year seniors,” head coach Josh Worthington said. “Right now, however, they’re at the varsity level and winning on a regular basis.”

This massive improvement can be largely attributed to the rigorous training sessions held by Worthington and assistant coach Jesus Garcia. During intense conditioning, athletes worked tirelessly on jumping and tumbling drills, strength training and one-on-one matches. Throughout the workout, the athletes demonstrated strong effort and positive attitudes, continuously moving through obstacles as a team.

“Even during especially strenuous practices, my fellow teammates and I never failed to crack jokes to remind each other of how fun it is to be a part of this team,” Varsity Wrestling captain senior Jack Liu said.

Their hard work and perseverance became evident in the ring, with athletes placing high in every competition of the season. At the annual Villa Park Fish Fry, the team earned third place, taking home their first trophy from that tournament in 10 years.

Fighting back against early setbacks, the team gained the momentum that carried them through a successful Pacific Coast League competition. The team now looks forward to competing in the CIF Southern Section on Feb. 14 and 15.

“It’s the determination to push yourself past what you think you can do,” Worthington said. “You have to fail to learn. You’ll get thrown around a lot, but eventually you’ll learn what this sport really takes.”