Clash of the classes, clash on the court 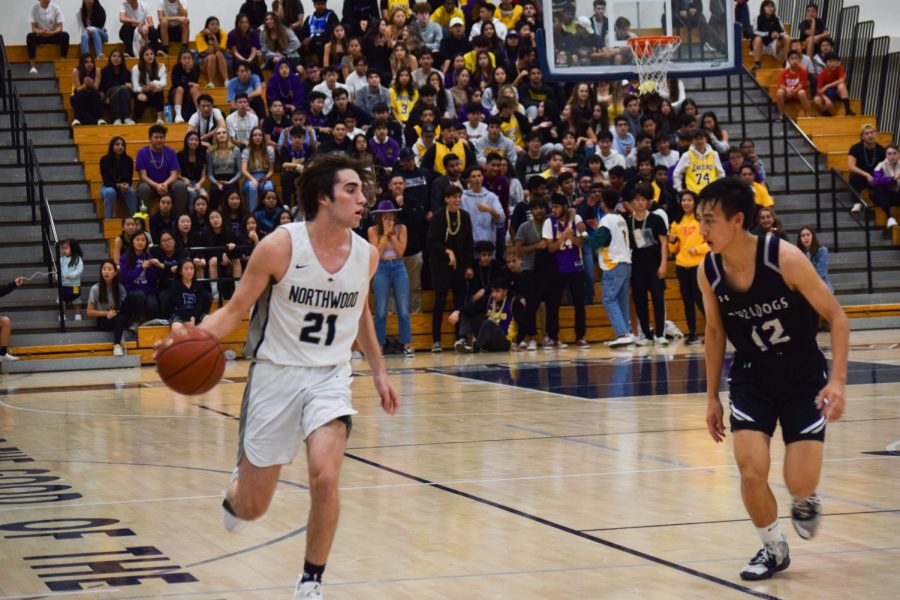 A night of exciting basketball came to a close as the Northwood Timberwolves fell to the Portola Bulldogs during the Pack the Gym game on Jan. 31. The night highlighted Boys and Girls Varsity Basketball and revealed the seniors as winners of Clash of the Classes.

Although both Boys and Girls Varsity came up short, the games were intense and close throughout. Girls Varsity nearly completed a 13-point comeback entering the fourth quarter, but unfortunately couldn’t close out the game, losing 46-57. Boys Varsity led for much of the game, but after a tight fourth quarter fell to Portola 48-57.

“The game was one of the craziest and coolest experiences of my life, especially with the crowd cheering and the intensity of the game,” Boys Varsity sophomore Devon Huang said.

Before the game, nine seconds of silence were dedicated to the victims of the helicopter crash on Jan. 26 that claimed the lives of former professional basketball player Kobe Bryant, his daughter Gianna and seven others, including Gianna’s coaches, teammates and their parents. The crowd remained silent until the eighth point was scored, representing the number Bryant wore for much of his storied career with the Lakers.

“Kobe inspired me to work hard every single day,” Boys Varsity captain senior Shandon Sharifi said. “My prayers go out to all the families affected by the crash.”

Pack the Gym was also the last home game for the seniors on the team, who were recognized in a ceremony before the game and were accompanied by their parents and loved ones. Seniors in Pep Squad were also congratulated, and Jazz 1 played to the crowd’s delight throughout the game. The half-time Clash of the Classes reveal also brought a baton twirling performance of “Life is a Highway,” presented by feature twirler seniors Benjamin Zietz and Angelina Chen. Northwood students and community left the gym that night with immense pride for the hard work portrayed through multiple students.

The atmosphere throughout the games was electric, and several key plays sent the crowd into a frenzy.. A layup by Girls Varsity captain senior Amanda Endres to bring the Timberwolves within eight points was one of the highlights of the first game. For the Boys Varsity game, a three-pointer by Sharifi to break the silent night had the crowd roaring on its feet.

The culture of hard work and persistence fostered by Northwood basketball is embodied in the players. The dedication they put into their sport is immense, and it was reflected by their play on the court. Although this season has come to an end, the Timberwolves will be ready to defend the den next winter.

“Through my experience with Northwood basketball I’ve learned that things don’t always go your way but you can’t let that get to you,” Girls Varsity junior Erin Halle said. “Always put in the hard work, and it’ll eventually pay off.”