Dancing in a winter wonderland at Winter Formal 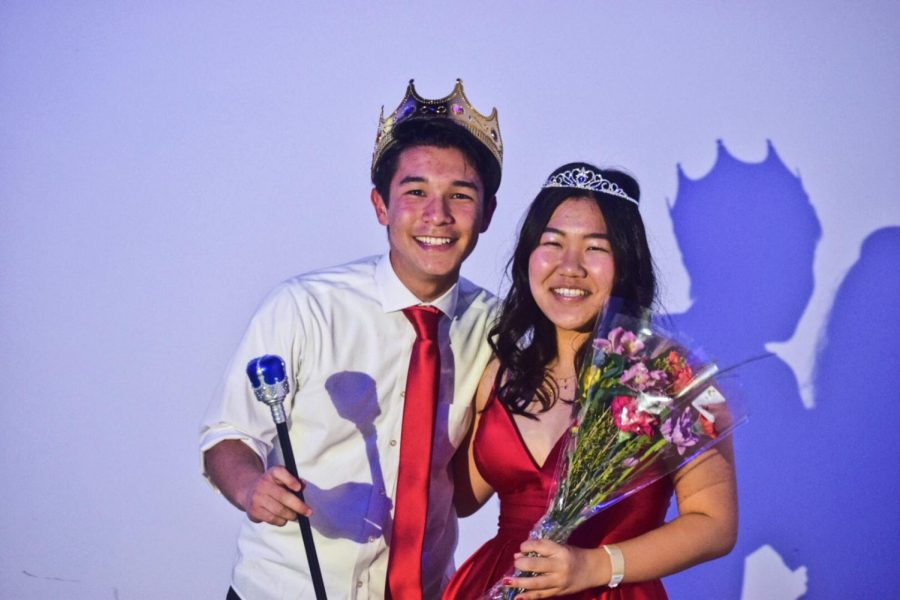 A FUJI FORMAL: Seniors Adam Fujiwara and Yukako Fujimori were crowned king and queen at formal on Jan. 17.

The chilly night breeze perfectly matched this year’s “Winter Wonderland” theme for Northwood’s annual Winter Formal as students danced their worries away at AV Irvine on Friday, Jan. 17. Upon entering the venue, students were met with a walkway leading to the dance hall with a high ceiling and large snowflakes projected along the walls. Neon lights flashed with the DJ’s music, extending to the veranda upstairs.

“The beginning of the dance was a little awkward because not many people were dancing, but as time passed, more people started really getting into it and singing along which was really fun,” junior Jenny Weng said.

The crowd was on its feet shouting the lyrics to “Roxanne” by Arizona Zervas and “Plug Walk” by Rich the Kid, not to mention throwbacks like Justin Bieber’s “Baby” and Mariah Carey’s “All I Want for Christmas is You.” Those who wanted a break from dancing played classic arcade games on the second floor, which

included Galaga and Super Smash Bros. Brawl on the Wii, or quenched their thirst with a cup of lemonade. Two hours into the dance, the Formal Court was called to the stage as students crowded around to witness the crowning. Senior Alex Ibasitas hosted the ceremony, announcing the crowning of sophomores Tammy Lim and Shan Syed as Formal Princess and Prince, respectively. “Being crowned as Formal Princess was a new and cool experience for me,” Lim said. “I didn’t expect for me to win, so that made it all the more fun.” After much anticipation, senior Yukako Fujimori was crowned as

“It felt very rewarding that a majority of the juniors and seniors voted for me as Formal King,” Fujiwara said. “Being crowned with Yukako was very special, and knowing her for as long as I have, it felt like everything came full-circle.”

ASB, primarily led by Senior Class Council, had been discussing plans for Winter Formal since September when they found out the location of the venue. A week of ASBorganized activities preceded the dance, including lunch fests, dress ups and this year’s new addition of the school bingo. Students could fill out a series of boxes in a bingo card describing various members of the Northwood faculty for a chance to win a pair of tickets to Formal.

“I am so glad to have planned Formal and seeing everyone’s pictures made me proud of everyone that helped plan this event,” Senior Class president Stacy Kim said.

ASB is now working hard to organize the upcoming Sadie Hawkins dance which will be held on March 13.