A winter season wonderland: say hello to a new class of leaders 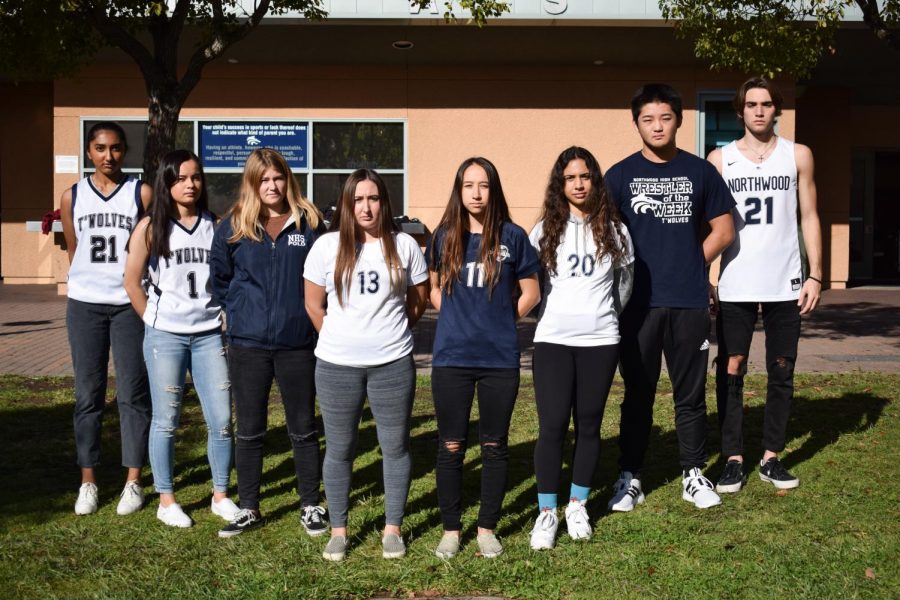 GAME FACE: This year’s winter sports captains are ready to lead their teams to victory.

With the winter sports season in full swing, captains are setting goals and preparing for another season filled with competition and sportsmanship. Throughout their time at Northwood, these athletes have embodied Northwood’s core values both on and off the field by giving all their effort and helping their teammates. They look forward to another season full of games, tournaments, bus rides and fun.

Senior Shandon Sharifi is returning to Boys Varsity Basketball for the second season as the team’s captain. He has been playing club basketball since seventh grade and hopes to continue basketball at the collegiate level.

The Howler: Why did you choose to play basketball?

Shandon Sharifi: My parents were both great basketball players, so right when I was born I had a basketball in my hands. When I was four, my dad had me join a kids’ league, and from then on he trained me and always helped me push myself to get better. But I ultimately decided to play because I fell in love with the sport in middle school, and I worked hard to be the best I could be.

Senior Brinda Asuri is one of the captains for Girls Varsity Basketball who likes the competitive nature of basketball. She hopes to maintain an encouraging environment to motivate the team to play harder and faster.

The Howler: What is your history with basketball?

Brinda Asuri: I’ve played basketball since I was 7 years old, starting in small leagues such as Irvine Youth Basketball League and Boys and Girls Club. I later played with a couple club teams, and joined the

NHS team freshman year. Basketball has always been one of my favorite hobbies.

TH: How do you feel about being captain?

BA: I’m excited to be co-captain this year with my friend and teammate, Amanda. We both started as freshmen on varsity, and to now hold leadership positions after four years is really amazing. I think our team has a lot of potential this coming season, and am looking forward to playing with them.

Boys Varsity Soccer captain senior Ethan Nguyen has been playing soccer for the past 13 years, competing on three different club teams. This will be his third year on Varsity Soccer at Northwood.

The Howler: What do you enjoy about your sport?

Ethan Nguyen: I like being able to get away from the stresses of academic school work and be able to play with my friends and compete against others.

TH: What are some challenges you face while playing soccer, and how do you plan to overcome them?

EN: Despite being the shortest player on the team, I play defender, which is usually played by bigger guys. To overcome this, I have to be able to hold my ground against people much bigger than me by playing smart and using my body well.

Girls Varsity Water Polo captain senior Hannah Miller is excited to jump back into another year of the teamwork-filled sport. Aside from club experience, she’s spent three years on Varsity Water Polo, making this her fourth year on the varsity team.

The Howler: Why do you like the sport and what excites you about being captain?

Hannah Miller: Playing water polo is fun because at the end of the day it’s not about winning or losing but about having a fun time with the girls. We have a lot of good girls coming up with the freshmen and club players. I’m looking forward to getting to know the girls more and I think we have a good chance to win league this year.

TH: Are there any values that you stress in the pool?

HM: I stress that it’s a journey to succeed, so it’s a lot of hard work and attitude. Attitude is everything. It’s a big area of improvement for myself as well, to have a positive mindset and not give up on things. Not everything comes very easily, so you gotta make sure you get the practice in or whatever you need to to get it done.

Senior Jack Liu returns for his second year as the Varsity Boys Wrestling captain. Liu began his journey with wrestling in Northwood and has played on varsity for two years.

The Howler: What’s special about wrestling to you?

Jack Liu: Wrestling’s fun because you’re actually going up against someone. The feeling of winning over someone else draws me in, and I believe it’s the hardest sport on campus.

TH: What makes wrestling so difficult?

JL: I haven’t conditioned as hard in any sport the same as wrestling. It’s why we have a high drop rate. My biggest goal is to keep the team together.

TH: How do you plan to achieve that?

JL: Leading by example. It helps to keep the students in line. You can’t just yell at people without guiding them, so I got to help with that. I stress determination because no one likes a quitter. When people have conflicts, I have to be the person resolving them.

Senior Jennifer Frey started playing soccer when she was 4 years old, and has been playing ever since. She sees soccer as a complex sport and experiences great reward playing her games.

The Howler: What are some things that you look forward to?

Jennifer Frey: Girls Soccer has been a successful program for many years and I am honored to have a leadership role this season. I’m really excited to lead my team to many victories this year and work hard to make that happen. I look forward to our home games because my friends come to watch often. It’s really motivating when people you know come watch because I feel as though I can’t let them down. I’m also looking forward to spending my last year at Northwood and in the program alongside some of my best friends.