The necessary evil of censorship in media 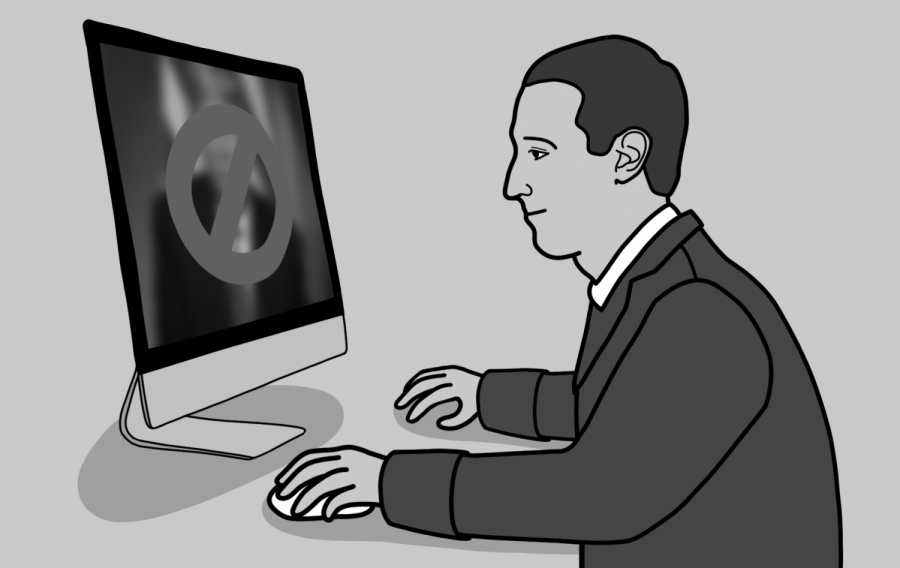 STUCK ZUCK: Facebook has been under fire for circulating misinformation.

On Oct. 30, Twitter announced that it will ban political advertisements ahead of the 2020 campaign, in reaction to the misinformation controversy that plagued the last election. Twitter is not the first to censor its site. Over the summer, YouTube deleted thousands of extremist videos to remove bigoted ideologies after backlash following its decision not to demonetize a famous right-wing content creator after he used racial and homophobic slurs towards a journalist. With similar controversies consuming Facebook and Instagram, it begs the question: to what extent should social media websites moderate their content?

Officials should censor information vouching for immoral deeds or promoting falsified information. In the 2016 statistical article, “The Spreading of Misinformation Online,” by the National Academy of Sciences provides evidence of people’s gullibility. After categorizing 67 public pages into falsified articles and factual articles, the group of scientists placed the data they obtained from viewer posts into a simulation. Falsified information was shown to have greater popularity and a longer lifetime compared to the factual information. Human susceptibility to misinformation is partly due to our preference for sensationalist articles over evidence-based ones and reflects our clouded judgment. In addition, people are more inclined to perspectives that align with their belief system; as a result, they can be ignorant or misguided.

Similar to Facebook and YouTube, Twitter altered its algorithm in 2015 to prioritize relevance over recency. Such algorithms spread tweets with prolonged engagement, and in the blink of an eye, the tweet has spread from one person to millions of people around the globe.

An example of this lies in President Donald Trump and the birther movement he popularized. In a 2011 tweet, he claimed that former President Barack Obama’s birth certificates were frauds, playing on underlying societal racism. He retweeted information supporting the birther conspiracy theory 67 times before recanting in Sept. 2016, but the damage was done. In July 2016, 41% of Republicans believed Obama to be born outside the United States, and 31% claimed to neither agree nor disagree according to an NBC poll.

In addition to misinformation on social media, emerging media forms such as “deepfakes” use artificial intelligence (AI) to imitate someone’s likeness. Initially, this may seem comedic and innocent, but when professionals use this software for malicious intent, problems arise. Last year, in Gabon, a Central African country, President Ali Bongo was affected by chronic health ailments and rarely revealed himself in public. People were growing speculative of Bongo’s absence, and political tension escalated. In March 2019, a video of a healthy Bongo surfaced. After seeing this video, the Gabonese military cited the video as a trigger for a coup d’etat, or government overthrow, arguing that their president was prioritizing his interests over those of his citizens. It was later revealed that the video was produced via deepfake.

This event could have permanently altered politics in Africa, and a falsified photo would have been the root cause. Although this event took place in another hemisphere, social media algorithms stay constant globally. Such an event could very well happen in our own country. In fact, it already has; in 1938, a radio broadcast of “War of the Worlds” sparked panic because listeners believed the events to be real life events. It was reported that many Americans were frightened by the realistic depiction of the novel’s alien invasion until the confusion was cleared. The Gabon affair and War of the Worlds panic evidence the potential repercussions of not incorporating censorship. We are gullible and this weakness makes censorship imperative to maintain a civilized society.

Yes, excessive censorship poses a threat to free speech, but a lack of it can pose threats to democracy. During the Cambridge Analytica Senate inquiry in 2018, Facebook CEO Mark

Zuckerburg testified that the Internet Research Agency, a Russian political interest group, manipulated digital information on behalf of Russian political interests, generating 80,000 falsified Facebook posts. With cybersecurity becoming more prevalent than ever before, moderation is growing increasingly necessary to protect the rights that our democracy values. We must not be blinded by our pursuit to safeguard free speech because our lack of action could eventually cost us that very right.

Freedom of speech serves to promote a climate of diverse views and openness to change to combat the manipulation of public perceptions. Through AI rcognition and filtering software, potential threats to our safety can be neutralized before any harm is done. Inappropriate content will be discovered, but measures would need to be taken to prevent the technology’s misuse. Regulations should be placed on AI use, allowing it to target accounts like those of the Internet Research Agency or other content violating the media platform’s specific policies while not infringing on other users’ free speech. Only through diligent interference will free speech be protected from its demise.

The impact of censorship is destined to promote a safer America, and as students who regularly engage with social media platforms, censorship is important for our personal safety. At the end of the day, small sacrifices need to be made to embrace a lasting change, and there is no doubt that well-moderated censorship assisted by federal regulation will benefit America. Our lives are no longer restricted to the physical world. We have ingrained ourselves in technology and we must ensure that we will only reap the benefits of the internet. We must not fall prey to propagated ideas more pervasive than ever. Censorship is the shield that will protect our livelihood and our future.