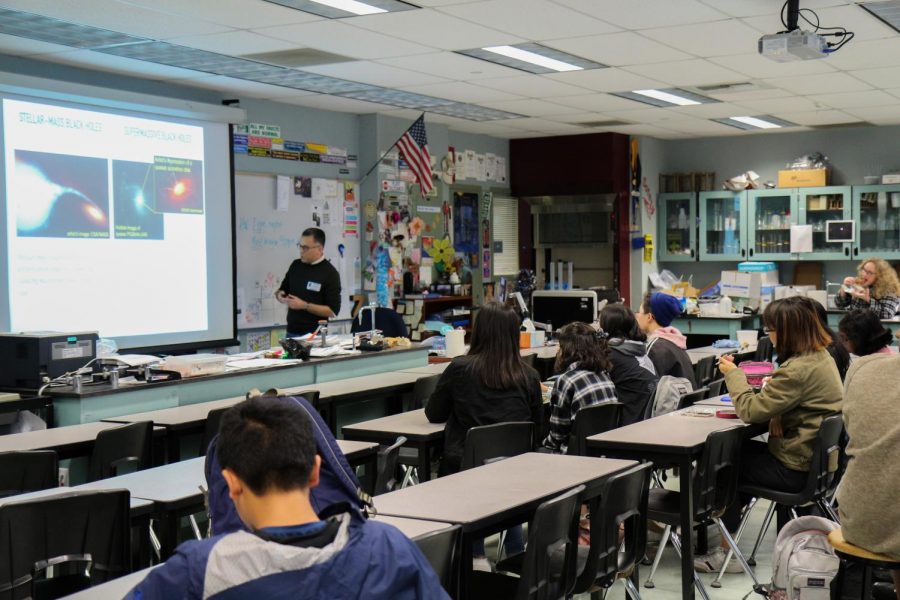 AN OUT-OF-THIS-WORLD MEETING: Astronomy Club members learn about black holes during lunch from a guest speaker.

In conjunction with the astronomy clubs, OC Science and Youth Action Team led activities like galaxy slime, planet ring toss and marshmallow constellations while OC Astronomers set up telescopes to view celestial bodies like Polaris, Jupiter and the Moon.

“I enjoyed seeing all the students really be engaged and interact with the activities,” Northwood Astronomy Club co-president senior Emily Le said. “We didn’t know what to expect when planning this event, but overall we think it was successful.”

This success was due in part to the collaboration among the astronomy clubs and their planning in the  months leading up to the event.

The idea of a districtwide astronomy night was first pitched by the University High School Astronomy Club last June. After the boards assembled, they focused on the logistics of the event including the budget, speakers and activities over the summer.

Overall, the event sought to provide an educational opportunity for children to learn about space and other astronomical objects. The event organizers hope to exceed this year’s attendance with more activities and speakers next year. However, for those who can’t wait, Northwood’s Astronomy Club will be holding its own events in the coming months.

“We have our own annual Stargazing Night coming up,” Northwood Astronomy Club vice president junior Anagha Subbaraman said. “It is a night where you can talk with people from OC Astronomers and look through their professional quality telescopes at various stars and nebulas.”

In addition to this event, the club meets every first and third Thursday in Room 1022 with guest speakers, volunteer opportunities and the latest information on astronomical news.